yay! I have my Internet back.
This week took forever to get through.
But it's done....and now follows a hopefully quiet weekend.
ALL the guys in this house are away on their annual June camping weekend.
It's Molly and me. And quiet. And hardly any meals to make because we are planning easy things and maybe going out here and there:)
And.... we are attending an "80's party one night which we are really looking forward to!
(Does anyone out there have stirrup pants and leg warmers they want to lend out????)
On a different note...this week I was listening to a lady tell her story of a "Lobster-Fest" she and her family just had. Her brother-in-law actually shipped lobsters all the way out here from the east coast so they could partake in a lobster bake. Or whatever it's called.....a lobster feast?
I have no idea why ANYONE would think that would be something to enjoy.
(Sorry for those of you who love lobster and lobster "eating's".)
But I STILL have nightmares on the one and only time I ever tried a lobster.
It was almost 2 years ago and Molly and I were touring out in the Prince Edward Island side of Canada. Of course because I was there, I felt I should really try out the lobster everyone there said was so wonderful and "locally brought in". Lobster is just part of the east coast.
One of my motto's in life is; if you have the opportunity to try something new....do!
So I did.
With Molly looking on, (and her camera), I braved the unknown and ordered the Lobster Special. (Special?)
I know, I know, it's just a lobster for crying out loud!
But I am the person who, when I see a stray lobster washed up on the beach (as I had the morning of this particular day), I carefully try to maneuver the poor little guy back into the ocean so as to save its life. And I don't touch it with my hands. Nope. I use a stick to prod it all the way back to the water.
That's me. I can't even touch the guy.
So WHY do I order the Lobster Special?
It's new, and I am in P.E.I., and I have to experience the experience.
As soon as it was brought to me, I cringed.
It smelled. Bad. 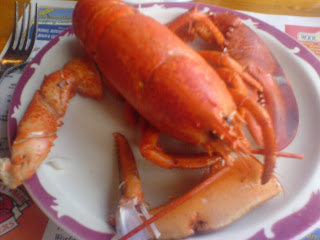 I may look calm here but my heart was racing. I had just spent a HUGE amount of money on a meal I didn't even want to touch, and was holding my breath so as not to smell the thing on my plate. 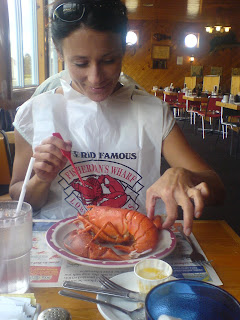 I had NO IDEA how to eat it. Where was the "food" in this thing?
I thought lobster was something everyone enjoyed. I thought it was "fancy".
But here I was, wearing a plastic bib no less, trying to pry my "food" apart. 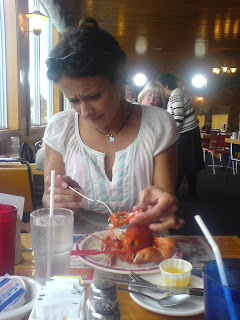 Within just a few minutes I came to the realization I had just spent too much money on something I COULD NOT eat. It was horrid. 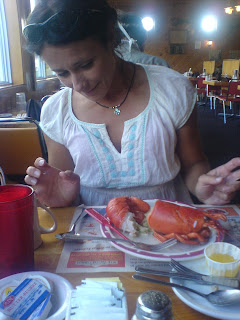 I guess the thing was kind of cute.
But one does not eat cute things! 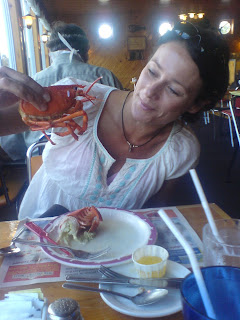 I at least can say I had the experience...but not one I would like to repeat.
~~~
This "story" has nothing to do with anything.
It was just something I was reminded of while I listened to the lady talk about her family's Lobster Time and how much fun they all had with it.
I don't think I could ever do that again.
But I did live through the experience of it.
Sorry to those of you who actually like lobster....
but I have to agree with those of you who don't!
Lobsters belong in the sea:)
Happy weekend to all of you:)
Never say no to something new and adventurous...unless it's the lobster.
Posted by Dawn at 9:36 PM

Email ThisBlogThis!Share to TwitterShare to FacebookShare to Pinterest
Labels: lobster, memories, things i will never do again

Hey Dawn, Yes, I agree, lobsters belong in the sea. I used to eat, lobsters, and crab and shell fish, but no more. I read in the old testament about the things God said was good for eating and things not good for eating and then read a book about those things and if you look it up, they are not even good for you. They are bottom fish and garbage eaters and they do their job well, but I think God told us not to eat it for a good reason because it can make us sick. My sister gets stomach aches and stuff like that all the time from eating shellfish, but she still keeps on trying. I'd rather leave them to their job in the sea.

I love Lobster, but got such a kick out of the photos of you checking it out! Very cute! ;)

oh I think I would be just like you...maybe if it was all pulled apart and in a salad but not like that...I would feel too sorry for the thing and would not be able to touch it. Hugs for a great weekend. xoxoxo