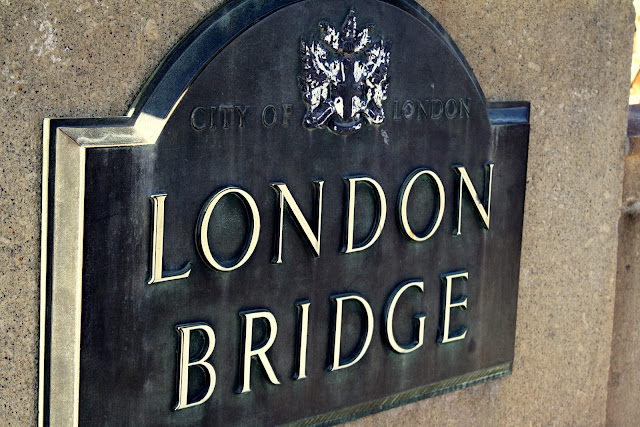 In
Lake Havasu, Arizona
I found the
~London Bridge~ 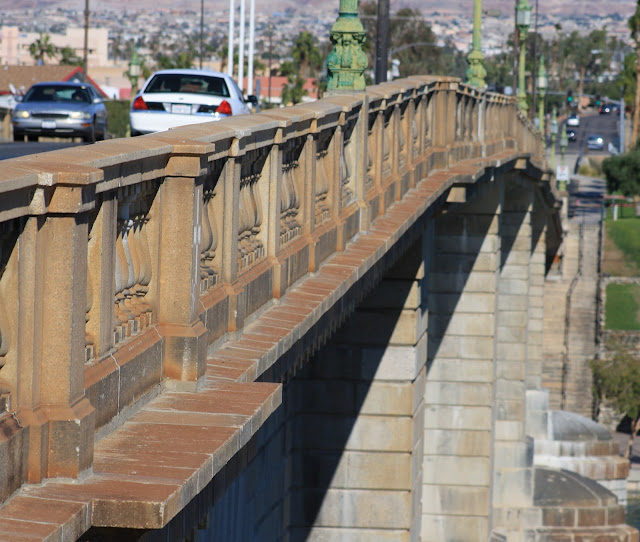 A man named
Robert P. McCulloch bought the bridge
and had it transported in pieces to Lake Havasu City...a city he founded. 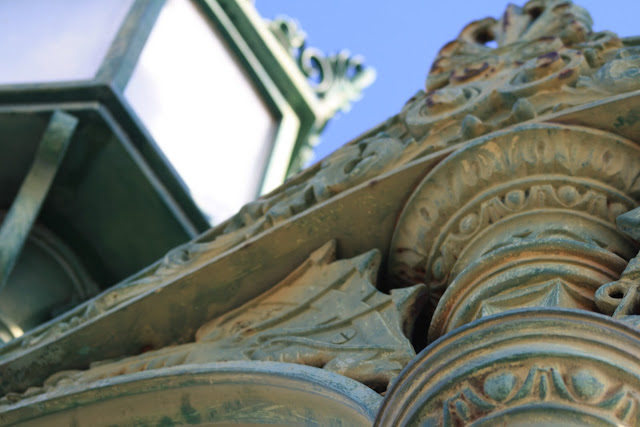 When Robert was asked by customs what it was he was transporting
his reply was;
"one antique". 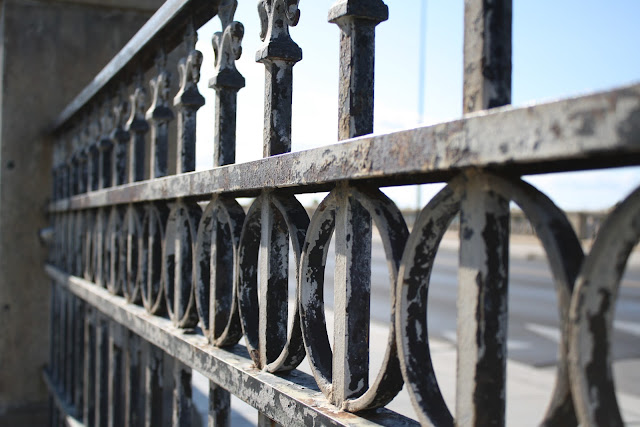 Each piece was numbered before dismantling,
and then reconstructed by number when it was rebuilt. 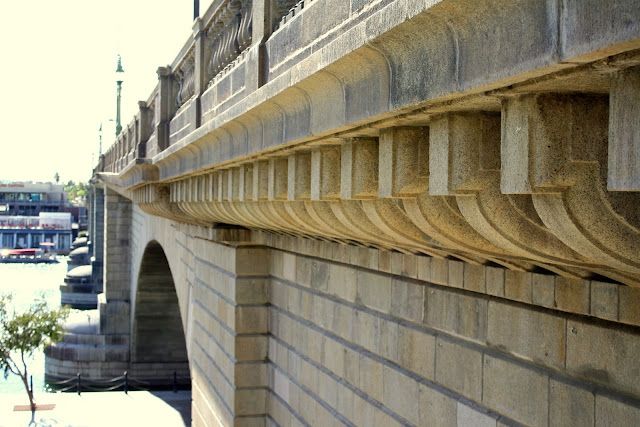 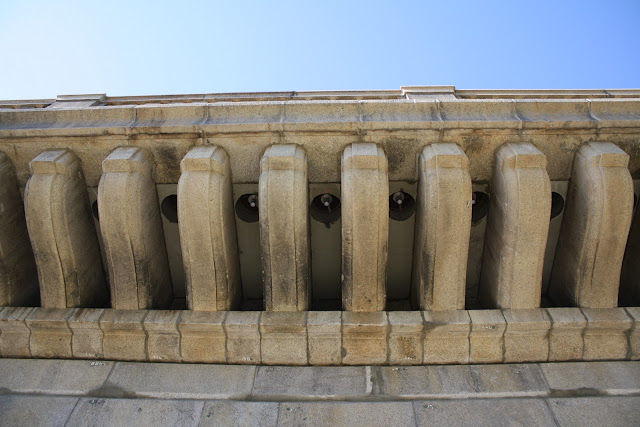 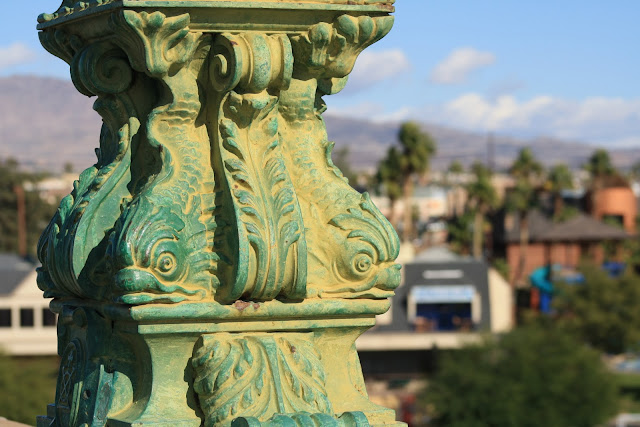 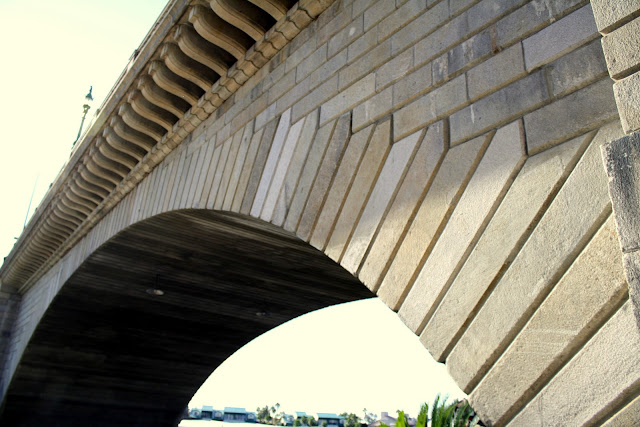 If this bridge could talk, I wonder just what it would say.
People have crossed on hurried feet.
Wars have waged and the flash of lights have reflected on the stone.
Hearts have been captured and then broken along its edges. 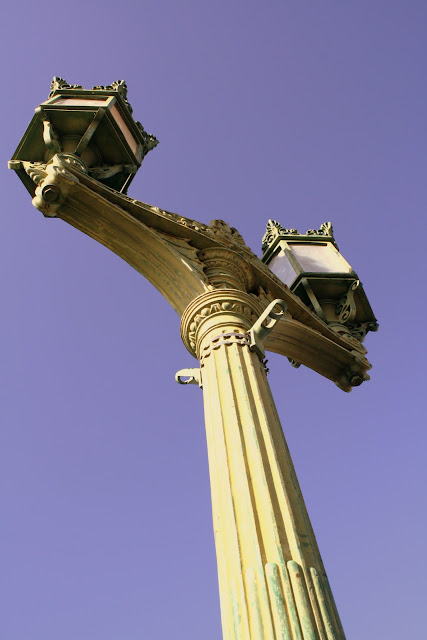 Does it find people to be different from one place to another?
Do times change who we are and what we do? 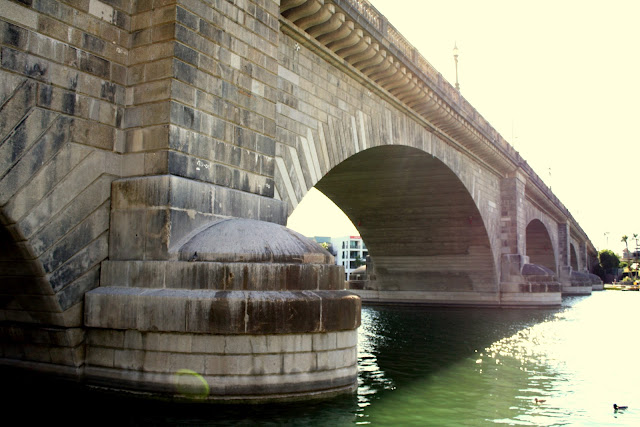 I can only imagine the things this bridge has seen.
What has crossed over it....
or floated beneath it.
If only it could talk.
Posted by Dawn at 3:58 PM

What an interesting bit of history you have there. The stories it could truly tell.

how very cool! and odd. and fascinating. :)

what an interesting story and a gorgeous bridge!

Great pictures and interesting story about the bridge. Seems kind of crazy but if you have the cash (and are kind of crazy), why not?

It is so pretty and I always look for it when we drive through there. When he was building it when I was a kid, my Dad used to laugh and laugh at it because then it was desert. Not a pretty city like it is now.
It is a beautiful bridge none the less and I have had those same thoughts about it too.
Just like the Windmill in Holland Michigan that has bullet holes from the Nazi's it made me think of all of the things it has seen too.
Does this mean you are hanging out someplace warm?

I would be thrilled to have you come along on a day of picture taking some time. But, be cautioned -- I am a lot more boring than you imagine!!!

Beautiful! Kind of strange that it ended up in AZ ... but I'm sure stranger things have happened.

I've seen it several times and I've always been amazed that THAT bridge is actually in the U.S., in the middle of the desert. Amazing!

I've been there. Standing on it made me think of all the historical people who may have walked on it.

Back again. Really liking your blog. This info is fascinating. I can remember hearing about this and wondering... Fun to see it through your camera.

We all learn about the "London Bridge" in the east as a young child but I never seen it before, thanks !

I always thought it odd that the bridge was moved to AZ... but my real question is why are you in Arizona this early in the season--wouldn't you more appreciate it say in late January or February? :)

How much does a London bridge cost anyhow?

It is amazing and you did it justice:)

Really amazing. Thanks for sharing!

I love history and find myself asking the same questions about bridges, barns, etc.

Enjoyed your images as always Dawn.

That is one very large antique;-) Thank you for sharing this, I never knew that a bridge could be bought, dismantled and reconstructed in another place...amazing story.

The London Bridge saw me, circa 1960 and now I wonder too who and what this bridge has seen all these years. A beautiful post with great photos of this old bridge. I have never seen pictures like this of it in its new location. Thanks, and I hope you are having a great trip.

Dawn this is an incredible trip I am enjoying with you. Who knew the London Bridge would turn up there. I love the photos and especially the story. Very cool.
Looks like you are enjoying your trip. YEAH. B

Very nice background on the bridge. And excellent photos!

Wow, that is so cool! I never knew the history of that bridge. Gorgeous pictures too!

Now that is an amazing piece of history! Thanks for sharing...I had never heard of this before. Such beauty and charm. Hope you're having a great trip!

Absolutely amazing! Can you imagine taking on such a feat... it's really astonishing, actually! It sure is beautiful & would be no matter what city it is in, but lucky Lake Havasu City!

Homeschool on the Croft said...

That is ASTONISHING! Really, so amazing. What a find! (I thought initially it was in London, Ontario. We've been there, and we were amazed at how many street names etc are the same as in London, UK - a place, btw, I've *never* visited! Shame on me!)

It's a beautiful bridge. It must have been quite a project, expensive too. What a unique bit of history!

wow, that is cool!

I'll bet it has served, on occasion, as a bridge over troubled waters!

We heard about this back in 1964 when we were living in Phoenix. I thought it was an incredibly stupid idea, but it doesn't look bad at all now.

It must be nice to be rich and be able to do such crazy things. I do crazy things but on a much smaller scale. Come to think of it, the world's probably better off that way! :-))

Dawn, what unique photos...reading your blog today makes me want to sing, London Bridge is falling down...

I love this post....awesome information...

That is absolutely incredible! I never knew this. I never even knew this was possible! Hey. You think this is when they started singing "London bridge is falling down..."?

Love these bridge shots, and the fascinating info bits about how it got here. Yep, I'm sure if it could talk, many very interesting books could be written ... let your imagination wander ....

I think it speaks volumes through your fine photography.

I can't imagine the work, care and dedication that went into moving this structure. Just amazing, isn't it? I knew it had been moved.. though I'd forgotten where in the U.S. it now resided. You're the first blogger I've known to cover this bridge.. thanks for that.

A very cool bridge story! Hope you enjoyed your visit to Arizona! :)

I think Robert P. McCulloch was lying. We still have London Bridge here...:-)