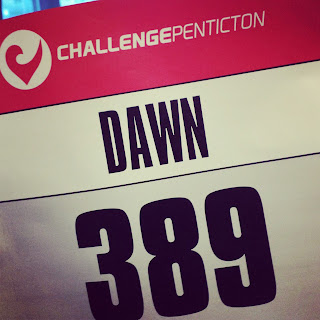 I Did It!
I am still revelling in the fact.
Sort of walking trance-like through the last week...wondering if it really did actually happen.

Last Sunday...August 25th 2013- I woke up at 3:45am...choked down a "breakfast"...and made it to the Body Marking area by 5am.
Between 3:45am and the 6:30am swim start...my mind was a battle field. I have never had to fight off thoughts as I did within those few hours. What a war.
I must have conquered something though..
because
I lined up at the waters edge at 6:30am
and ran into the water on the sound of the horn....right into
choppy, washing machine water...
and swam 3.8km.

I honestly think that was the easiest part of the race for me...when I thought it would be most difficult.

I enjoyed the swim. 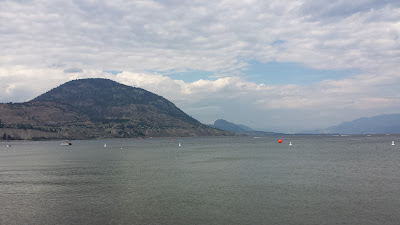 Open water swimming has never been a love of mine but I actually enjoyed this.
Anticipating the 180km bike ride ahead...I felt the swim a perfect opening to the race...and it eased my brain in the fact that if I could get through that distance in choppy open water surrounded by 100's of people...I could manage a long bike ride over a mountainous pass on 2 wheels just fine.

And I did.
Almost 7 hours of up and down and heat and wind and passing and being passed.
Hoping I was fueling properly. 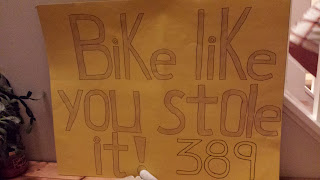 Waving at my Cheer Squad in the matching T-shirts they made especially for me.... it kept my spirits up when they wanted to plummet...lamenting over the fact that at the end of this bike...I had a marathon waiting for me to run. 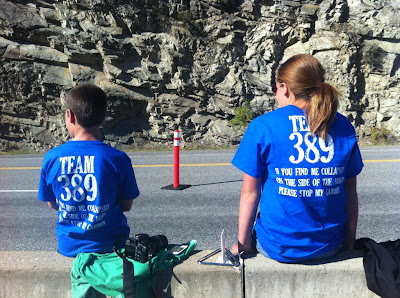 
Just when I thought I had cycled up the last hill...another one loomed ahead.
At one point...11km of incline greeted me around a turn.
It took my breath away..in more ways than one.
But I tackled the hills - hoping to do so before they tackled me. 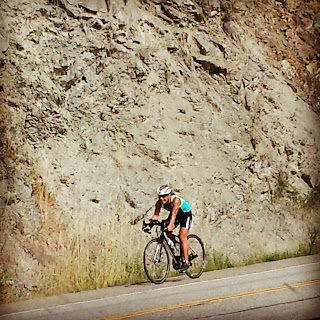 would I get a flat?
was I eating enough to get through he bike and onto the run?
who was passing me?
who could I pass?

Head Games.
Your worst enemy during a race. 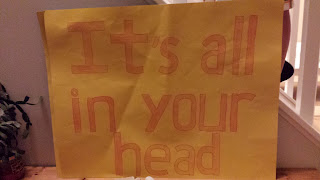 One of the signs held up by my Cheer Squad was...
"It's All in Your Head".
How true that is.

For the 1st 23km....I walked/ran/walked..consuming water, coke, and watermelon.
Luckily the day wasn't as hot as originally anticipated. It was more along the lines of what I was used to training in....26/27 C.
The run course was beautiful...along a lake edge, and I was continually greeted by inspiring spectators at every turn...cheering and applauding the entire 42.2km.
I wish those people knew what it meant to hear their applause and congratulations and inspiring words....when all I could think of was- OUCH.

The 23km mark of the run is where I seemed to lose it.
Looking back I sum it up to the fact that I didn't consume enough water on the bike.
In fact...I think I only managed to down 4 bottles of fluid from race start to the run portion...which wasn't near enough.
So my body said.

I'm kicking myself now...
if I would have kept my run pace consistent,
and consumed more water on the bike,
I am pretty confident I would have completed this race in my Goal time of under 14hours.

As the sun set...and I got closer to the Finish Line...my head kept yelling to move.
And my feet kept yelling to stop.
But I didn't.
I moved.
As slow as it was...I moved forward...I knew I was going to see this to the end.

14 hours and 23 minutes from when I stood at the waters edge early that morning.....I crossed the Finish Line with my arms up.
The last 6 months of sweat...sleeplessness...loneliness..frustration....all wrapped up into one final step across a line marked with a banner....saying.... I finished. 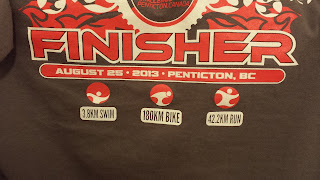 This was by far the biggest goal I set out to accomplish when I started this Triathlon Journey.
It was what I have worked for over the last 3 years-
as I went from Sprint distances...
to Olympic...
to the Half-Ironman last summer.

This was THE race.
The BIG ONE.

I managed to get there.
And now-  it's done.

I could not have conquered this alone.

Over the many weeks of training I have had an incredible friend cheering me...
biking as my "pacer" while I ran...
driving as my support vehicle while I biked long Sunday rides for hours on end...
sitting at the waters' edge while I swam.....
inspiring and encouraging.
Making sure I had everything I needed to train and race with.

Kiddos who kayaked beside me when I did Open Water Swims...as I panicked my way through them...listening to my lamenting and wondering if I could really do this.

I also had a daughter who believed in me...who wouldn't let me quit...who told me I had come this far- it was too late to bail out now...and who whispered in my ear at the start line: "I'm proud of you Mom."

Those who texted me...sent letters and cards and emails of "Good Luck"...right up until the Start line minute. 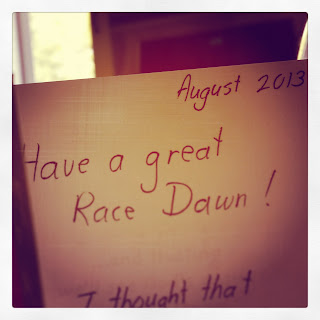 The "Great Job Mom" banner taped up in the hallway when I got home at midnight the day after...exhausted and tired and sleepless. 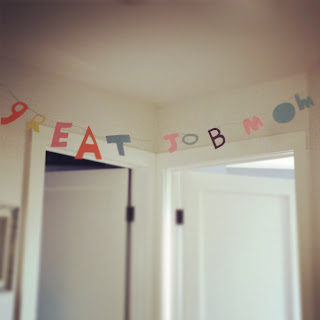 Those were the things I will hold close when I remember this race.
Those who believed I could do it when I whined I was done.
The encouragement at the low spots...and who wouldn't let me quit even if it meant their sacrifices for me to do it.
Thank you. From the bottom of my heart...thank you.


Now....as I sit here and look at my Bucket List of races...and realize I have them all crossed off...I have a choices to make.

I can take it as an overwhelming mess...or a Challenge. 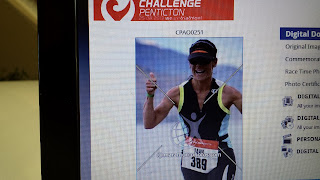 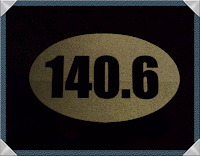 Oh Dawn when you first started this journey of yours I had NO DOUBT you would complete it. I am so proud of you all your hard work paid off. I am so excited for you. That is a great time. Oh I am so happy for you. HUGS B

Congratulations! Love the fact your family was an integral part of your success. xo

You are amazing. Congratulations!

You are amazing. Congratulations!

Very nice to complete. I was in Kona,HI in June for a half marathon on the Iron Man site.

Congratulations! You rock! Finishing an Iron Man is fantastic.

Wow you did it! I am proud of you but the sweetest was from your kids.....proud of their mom

Wow, quite the race, glad you made it to the Finnish line.

Way to go, Dawn! I'm so very happy for you. The battle in our head is often the hardest to fight. But the victory is so worth the battle.

Dawn, you are amazing. Correction. AMAZING!!! I can't imagine how hard this was. Grueling.

I'm sorry and that I'm getting here so late. Congratulations! You are one strong person Dawn. You set out to do it and you DID IT!
Amazing is what you are...

Dawn: Happy to see you are still blogging--I added you back to my blog roll. My old sport-running! Merry Christmas! ;)

Truly a proud achievement, Dawn! Congratulations!! Many of my friends are Triathletes. ;)