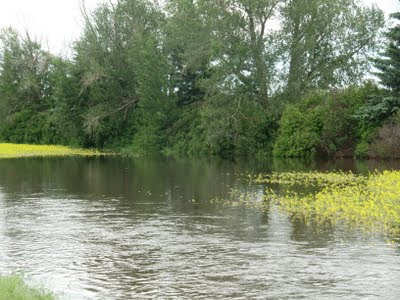 For hours yesterday morning,
a thunder and lightning storm sat above our heads....not wanting to move.
It left us with almost 4 inches of rain (according to the rain gage),
and it left flooded fields in its wake,
overflowing ditches, and washed out roads.
So when THIS field was brought to my attention just a couple miles down the road- 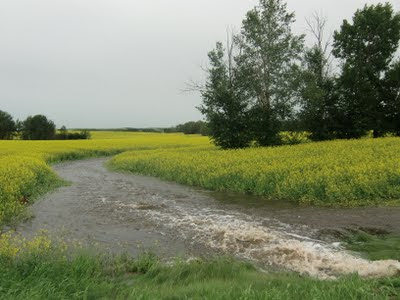 ....I couldn't resist.
I HAD to kayak down the new river which now snaked its way across the canola  field.
The Farmer gave in to my seemingly ridiculous idea, and loaded the kayaks.
Ben came along to try it out, but after seeing the whirlpools of water and listening to the rush of it all as it torpedoed out of the culverts, decided to hang back and be our photographer. 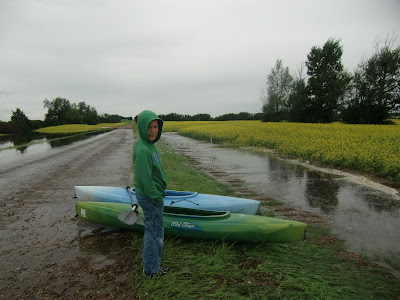 The Farmer~ about to enter his field in a way he had never done before.
Forget trucks, tractors, seeders, sprayers, or combines.
This time- it was a kayak. 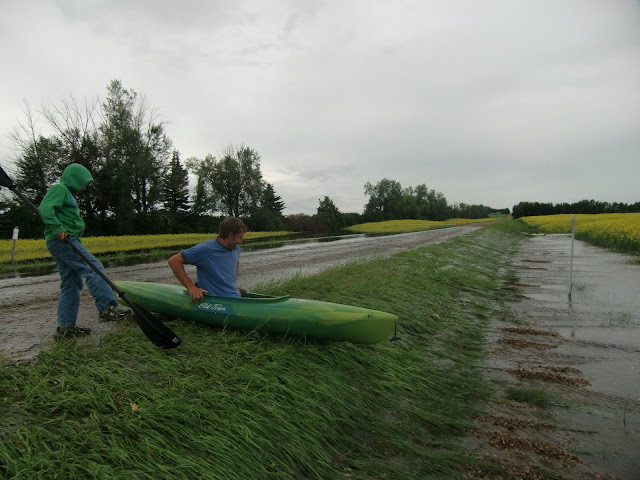 And we were off.
Into an unknown and unheard of adventure....
paddling forward to see what was around the next corner.
{I'm thinking-
canola.} 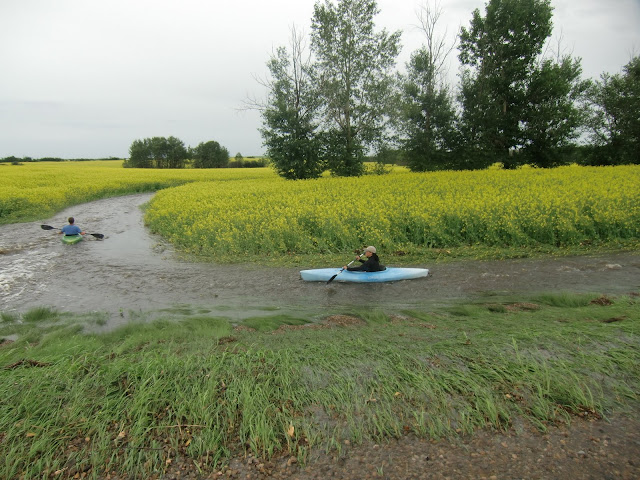 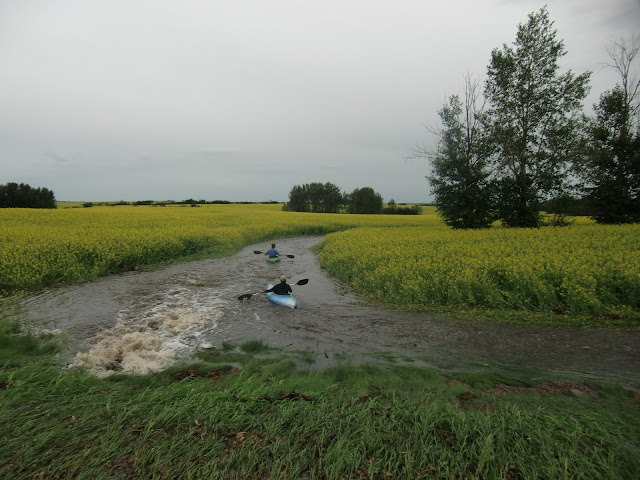 What followed was a very fast and pretty sweet kayak.
Oh I WISH I would have been daring enough to bring the camera through that canola river jungle.
It was beautiful, surrounded on all sides by millions of canola flowers.
And even though there is actually a river flowing through Farmer's field now....
it was a nice thought to think we were making the best of it.
We hit whirlpools of water, which-
when we hit them head on, resulted in water pouring in over the front of the kayak.
I don't think I've ever been doused with water like that while kayaking.
(Who would of thought it would happen in a canola field.)
Of course...we had to bail out before we hit the actual creek.
It's so high now and supposedly quite dangerous with the logs, trees, and whirlpools.
(As much as I insisted to try it out- I guess I don't know my creeks and dangers of;)
We dragged our kayaks out of the water, and hiked our way back to semi-drier ground.
Considering we were hauling 2 kayaks through soft mud, and having to battle 4 foot stalks of canola,
I think it was one of the prettiest hikes I've ventures out on. 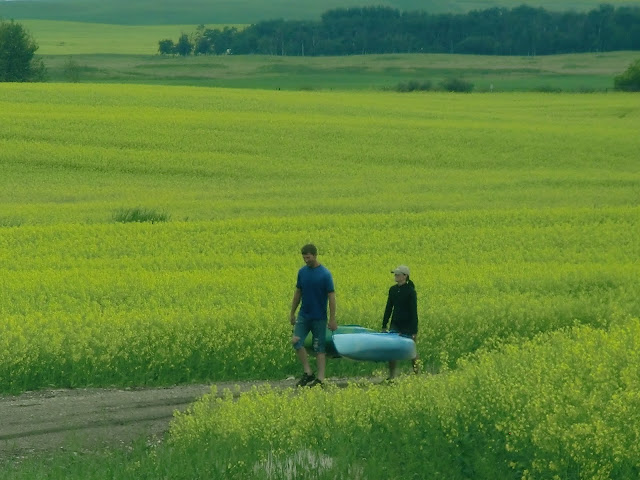 It was probably the best way to make lemonades out of (raining) lemons.
And so much fun....
I just had to go one more round. 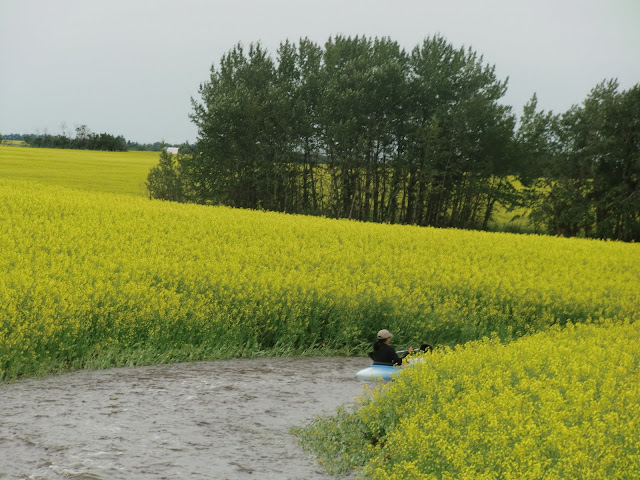 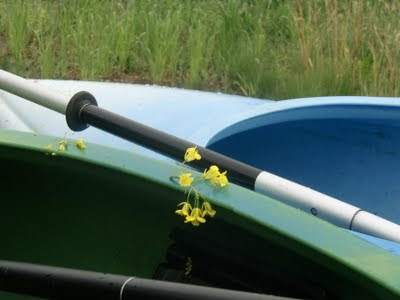 oh, you are crazy, girl! and glad your hubby is just as crazy as you are, obviously! what a unique thrill in your own backyard! :)

dawn...i am going kayaking. you have inspired me & i am doing it. stay tuned, i am ready for the adventure of a lifetime!!!

That is so awesome that you were able to do it! That field looks so beautiful! What fun!

I do think it looks like so much fun and the fields are just beautiful. Such an incredible memory so glad you took pictures.

Wow your Farmer really knows how to make a girl happy. This looks exciting and beautiful I am sorry about the damage but there is something fascinating about freak weather and how people deal with it. I think you made the best of a bad situation for most.
Too bad we cannot send some of your weather farther south.
Great post I enjoyed the ride also. B

How cool is that! Talk about a very unique experience. :)

It's not everyone who can say they went kayaking in a canola field :)

No way!!! How did that idea ever pop into your head? I love it. What a beautiful field and I especially love that last picture. This made me smile...what a sight you 2 must have been! :)

so fun!
good for you adventure girl!
lol
that's my new name for you I think....Adventure Girl

That is just too funny! Can I go with you to the Canola fields?

I do admire your adventurous spirit and your inherent bravery!

What a great trip to explore.I wondered if he had paddled before. One of the best rivers for fall is best taken in floods here. Now you might have to walk.We always hit it as kids and it is the first I hit every year just about.Did 54 miles today in a little over four hours biking.Nice to draft with the pack.

Wow! And right in your own backyard! What a great adventure, Dawn. Just my kind of thing!

i must come and visit you sometime! :)

"I'm thinking - canola"... you're HILARIOUS! It's not often that I'm jealous of other people's experiences, but I am green with envy right now! Think I need a cider while I wait for said envy to subside:-)

Homeschool on the Croft said...

That was fabulous.... and I only read it! Good for you for grabbing the adventure :)

What a serendipitous adventure! I love the photo of the two of you walking back with kayaks. What amazing colours!

Now that looks like the best idea ever! What fun! I'd go twice too! : )

Good for you for finding the fun side.
As an old farm girl I was saddened and horrified by the amount of water in the field 'cuz I know exactly what it means, but still, it looks like you had a blast.

Absolutely amazing!!! I would have loved that but I have no kayak.

so thats what rain looks like...what an adventure...

It sounds like fun but we always think storm waters in Georgia are dangerous? I am glad you enjoyed your ride with no harm....

And of course the farmer just happens to be a hunk . . .

How cool is that?! It looks like so much fun.

That's fantastic that you had the farmer in on the fun, what did he think of this adventure?

What a great way to spend the day. I really love these shots.

Ha, great way to find adventure.
The pictures of floating through yellow flowers are very pretty. Hope the canola harvest isn't ruined by all that rain.

Who would have thought such an adventure would be there temporarily in your neighborhood. The power of water never ceases to amaze me.

Amazing adventure - not many people would be rushing out to kayak in the canola fields, one for the book.!

You my dear are what women dream of being....love your adventurous spirit and that you have a partner to share it with.

Wow! Kayaking in an unknown stream is adventurous as well as dangerous. Simply awesome vast canola field there out. Hope it was fun and fantastic kayak! Hehe..

haha!! always looking for adventure, aren't you?! what a fun ride and unique setting! nice of the farmer to oblige you guys.

What a terrific adventure! I'm so glad you have photos to prove it really happened. :))

What a great adventure! Such lovely shots too.

What a super adventure. I never would have thought to do that.. then again I don't own any kayaks.;) Very cool. And lovely shots.

Now that's making the best of an opportunity.

Beautiful! It looks like fun even if it was a bit too much rain.

Definitely from lemons to lemonade. What an awesome idea! Looks like you all had an amazing time kayaking in a field. :) Not many can say that!! :) _B

that is awesomeness in a canola field if i ever saw it.

i kinda lost touch for a wee bit...looks like you are having a grand summer adventure.

Looking forward to you getting back on your blog Dawn. Richard

these are amazing Dawn! What an awesome adventure that must have been

LOVE THIS! Why let water and fun go to waste! Wooo hooo, what a neat ride it must have been.

Well, I knew canola (oil) was good for you but not quite in that way! What an amazing post!

Congrats on your POTW!