The Olympic Triathlon
1.5km Swim / 40km Bike / 10km Run
~~~
It seems as though I can be full of a lot of hot air here on this blog.
It WAS all in my head.
It was.
But....it took a lot of effort in the legs, arms, and lungs department too....
~~~~
Sunday morning was beautiful.
And the lake was calm...a good thing.
It was full of weeds which they supposedly "mowed" before our race, but I still ended up with a few covering my cap and goggles as I swam. I just kept thinking about groceries I needed when I got back home.
Really. That's what I thought of. 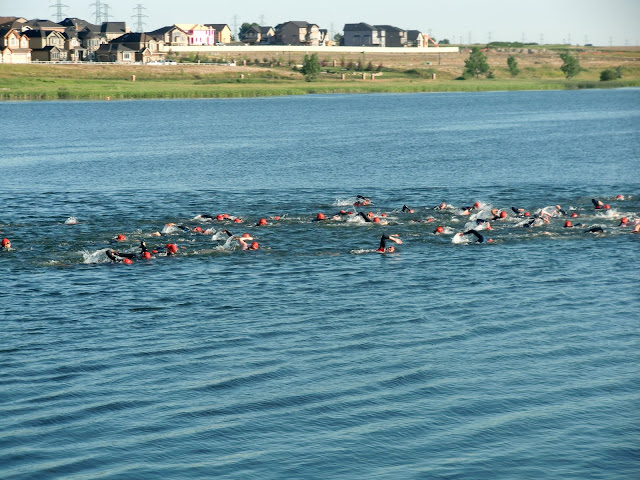 Oh....
and I also had to watch out for the (rather large) guy who didn't know how to sight while swimming.
He zigzagged back and forth in front of me....swimming over top of me and hitting and kicking to find his way to the turnaround buoy.
For some reason I couldn't shake him.
He crossed me at least 6 times over a 500m distance.
Other than that- I really did enjoy the swim. 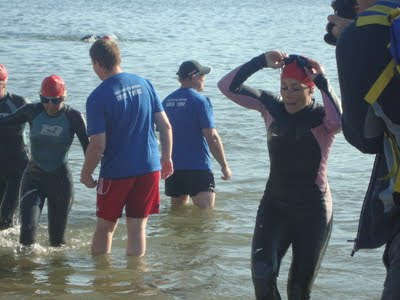 (Swim Time: 36:41)
Transition went okay.
I did have to sit down to take off that ridiculous wet suit.
It was either that or fall on top of the guy's bike next to me.
I'm sure that thing was worth more than my vehicle.
And no- I'm not jealous;) 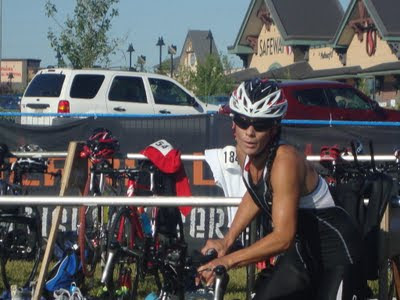 It was a 3 Loop bike course.....a bit disheartening every time you rode past the volunteer yelling:
"Lap here" or "Finish here"....and I knew I still had to turn right for 2 more laps. 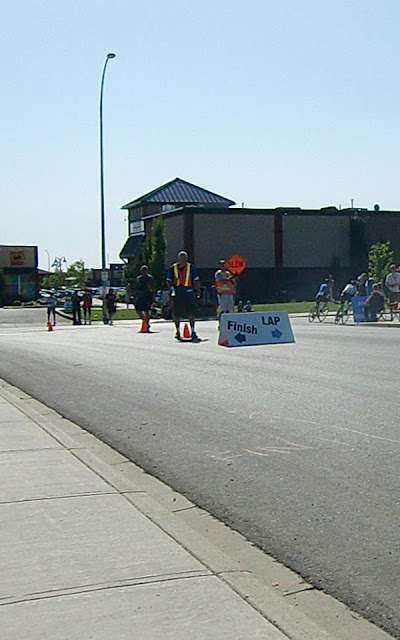 But bike seems to be the easiest leg of the race for me, so I  didn't mind the pedal by canola fields with the mountains off in the distance....3 times in a row.
(Really...I wasn't sightseeing on the bike.
But it sure was a darn pretty ride:) 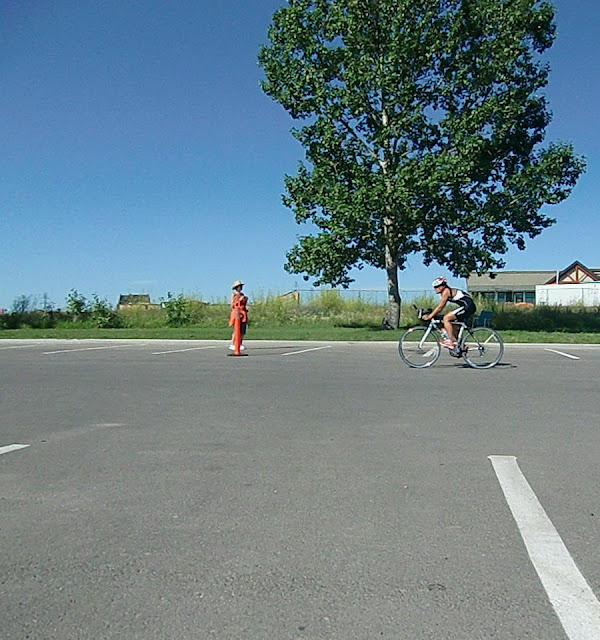 (Bike Time: 1:10:31)
Last and my least favorite,
was the run.
It wasn't bad to swim 2 laps of the lake course.
And even the 3 loops on the bike was manageable.
But I now know how a hamster feels running on a wheel.
FOUR laps of a running loop was not a good thing for my mental state after all I had already done.
Each time we did a loop on the run we had to actually run BY the Finish Line. 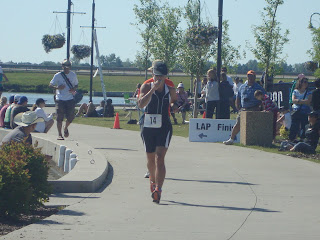 (Note the signs behind me.
I didn't like them until the 4th lap.)
3 TIMES I ran by that finish...listening to names being called out by the announcer.
Names of people who had already run the 4 loops.
It was quite the mental challenge (for me).
So... being
the "optimistic blogger/runner/pretender" I had to yell out at every other person I saw on the run...
"It's All In Our Heads!!!"
(pffft!)
I don't think any one believed me.
At that point- I didn't believe it myself.
And neither did my legs or lungs.
But yes.
I did eventually get to the 4th round. 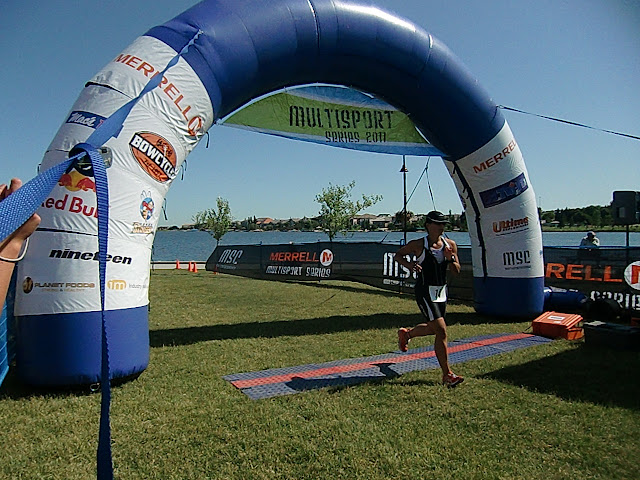 ~Run Time: 1:02~
(not happy with that time at all...but I wasn't going to do it over;)
It's funny....
I'm glad that race has come and gone.
But I'm left sitting here wondering what I do now.
It seems all those hours of training
for 2 hours and 49 minutes of race time was quite an ordeal.
I can't quit thinking....
*Maybe I should use up all that training for a few more races.
*It wasn't all that bad.
*The run could eventually be my friend.
*I felt actually pretty good after I caught my breath.
*I think I could do a few more over the next month or so.
Then again,
maybe it's just all in my head...
~~~~~~~~~~~~~~~~~~~
(A HUGE thanks to all of you who encouraged me and believed I could do this thing. I actually thought of you as I ran and didn't want to quit because I didn't want to do a blog post on quitting;)
And another thank you to all the other Blogger/Triathletes out there who are such an inspiration for me.
You HIM and IM people are Amazing to go those distances!!!)
Posted by Dawn at 10:47 PM

"i didn't like my time but I wasn't going to do it over..." that made me chuckle. Nice job thought...every race is a learning experience

I think you did a great job of it! Congratulations!

awesome awesome awesome
you are my hero!!!
you did good girl...really really good
and don't be so hard on yourself about that running time, consider what you just did
and man do I hate loops...I really hate loops
knowing you have x more to do and yet you just past the finish line...not fun!!!

You did it! Congratulations!

Good job. We never doubted you could do it :).

The only tri I can handle is go to work, come home, sleeep...repeat.

CONGRATULATIONS DAWN : I never had any doubt you would accomplish that goal. You are my inspiration.
I love the way you describe the race and your feelings while in the middle of it, it makes it more real for me.
Relax now and get some groceries. I am sure there is another race in your very near future. Congrats. B

Congrats first! I am proud of you finishing....I like the way you were thinking of things as you went through the race:) I would guess "the thing was probably worth more than your car"!

Congrats to you! I can't imagine competing in that!

Hopefully you did good time in your class.There is a big one in Iowa Labor day,the Hyvee triatholon.

Congratulations!!! I think you're amazing even though you weren't thrilled with your run time (I can totally see how 4 laps would be a mental challenge). I couldn't imagine a 10k run after a swim and bike ride...wow!

Congratulations! You did great! I'm always so impressed by those who do tris. I'm way to wimpy to do those brick workouts, and I don't swim. Well, I can swim, but not very far! ;-)

you, my dear, are a rockstar! 4 kids, husband, critters, job, and you still kick absolute frickin' butt! in my next life, i want to be like you!! :) congratulations, dawn, on SUCH a huge accomplishment!

Woohoo!! Congratulations, you did it.

Congratulations! You are an inspiration to me and many others.

You are one of FEW....pat yourself on the back my lady.

I kept thinking about you and wondering how you did. I think it is so funny you kept going because you were going to have to write a blog about it. It is funny how blog posts become a motivator to keep us doing things we might not have tried or given up. I am impressed!

Wow wow wow! What an achievement!

Dawn, you are a marvel. I am exhausted after trimming the hedge, and you run, bike and swim for two hours and 49 minutes. You are a brave soldier. Good for you.

you are truly amazing! what a feat. there's no way i could even fathom such an undertaking! (especially since i can't swim.)

I don't know how you do it! serious coolness, cousin!!! xo

You had me already tired just reading this post,lol. I dont know how you do it. Richard from Amish Stories.

Way to go Dawn! That is quite an accomplishment. Smokin fast bike split too! Four loops on the run is down right cruel.......

Oh, I think you should do a couple more races since you put all the hard work in to get to this point.

Congratulations, glad you made it to the finish line.

haha, yep on the run leg of every tri I do I think "why do I hurt myself like this" then within a day or two, I'm over it and searching for the next race :-).

You should be very proud of yourself. There are alot of us out there who probably wouldn't have made it past the first round. Good Job!

you rock dawn....awesome pictures, i am so glad someone was there to capture it all so you could share it with us!!!

did you hear me cheering on the sideline?!?!

Great job! I'm amazed that you could do all that. Your time seems pretty darn good to me!

YYYYEEEEEESSSSSSSSS! I knew you had it in you! Way to go Dawn! Thank you for sharing your experience with us here, you're one amazing lady!

Very well done Dawn...I could never do that.

I'll tell you what's in my head. You are awesome! You might even inspire me to get off my rear end...

Thanks for stopping by and commenting on my race report, but you seemed to have done an amazing job yourself.

Congrats on the strong finish and don't stop at the Oly. Take it to the next level. You have done all the training and now you just need to mentally focus on the longer course.

you did great!! it was fun to come and watch you! i think your time was great!!! my time would be 3 weeks and i would NOT want to do it over
( did the guy ahead of you in the swim run into the bouy?:)

Congrats Dawn, I am so impressed with your accomplishments as there are so few people with the determination and stamina to complete a race such as this (myself included), you should be proud of yourself because we all are proud of you.

Dawn, you rock. I can't even begin to tell you how much I admire you. Keep doing what you are doing.

You rocked it!!...just like I knew you would.
Your bike time was FAST! I can't believe they had to "mow" the swim course??
I don't think I could do a loop course - I just don't like them AT ALL.

Way to go Dawn, you are truly an inspiration.

I think it's amazing that people can get geared up and trained to do this type of thing.. Congratulations ~! You did good~! I loved the pictures~! I chuckled and just imagained what that would be like to have someone big running over me in the water.. Glad he didn't bite. Yikes~!
Have a Tiggeriffic Day~! ta ta for now..from Iowa:)

I'm in awe! What a gal! I really don't know how you can do that! Kudos to you!

And you kept your sense of humor.

You are an impressive person!

Outstanding Dawn. My son is a marathoner as well ... lots of training and discipline! After he did the Boston last year, he said he wasn't ever going to do that again ... but you know what I'm going to say ... he ran it again this year. LOL

I'm so in awe, I can't think of anything witty or amusing to write. A big WELL DONE!! A great achievement!

Amazing determination and effort Dawn, that not everyone possesses or even aspires to. All in all I think it's pretty amazing and inspiring.
: ) Congrats!

wow....i am more than impressed. seriously, you just totally amazed me with all of this !!

and made me feel bad about not exercising very much and that i should be dong more than i am....

but hey, this is about YOU and way to gooooo !!!