Not too long ago,
2 people decided to escape the every-day monotony of routine and busy-ness,
and take part in a City Chase Adventure.

They registered for the race, signed up under the name:
"2 Sole Racers".
Heart, Soul, (and Soles) were put to the test. 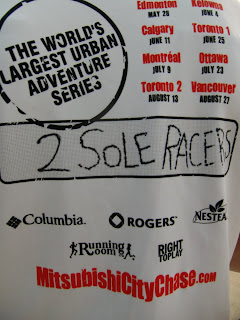 28 Checkpoints were hidden about the City-
10 of them needed to be completed within 6 hours.
450 teams of 2.
20+ degree weather.
Brand new runners.
Gun went off at 10am.
The Race was On.
~piano playing at an Arts Center.
~ posing with a paper by a water fountain.
~goalie equipment worn and hockey skills tested.
~pushing cars around parking lots.
~climbing 12 flights of stairs with 2 suitcases.
~lassoing
~chained together until you could unlock a code
~lacrosse
~worms
~Boa Constrictors 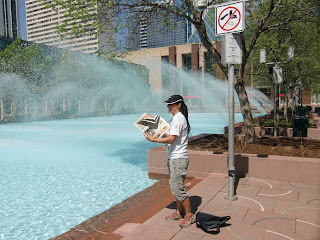 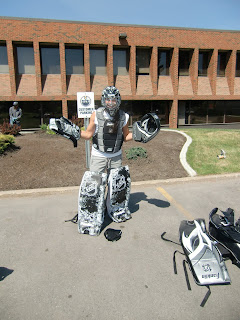 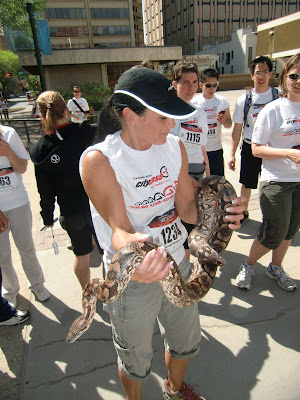 The 2.... managed to cross the Finish Line.
14km and 5hours 40 minutes later.
Surprisingly they were still speaking after it all. 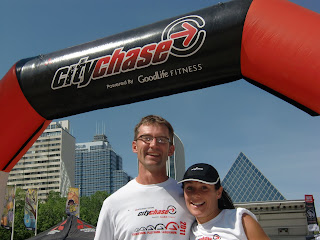 The best part of the day had to be the end. 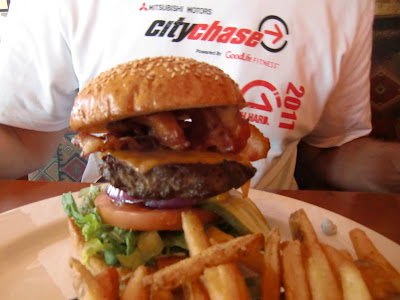 That was enough of a Monotony Breaker for awhile.
Normalcy and the mundane is once again appreciated:)
Posted by Dawn at 3:24 PM

Love the Piano pose... looks good on him...and you and that snake are quite the pair....but that burger...oh my!!
Glad you guys had a great time!! xo

Wow, that sounds like you had a lot of fun. I'm sure the food at the end was the best.

Sounds and looks like fun! Bacon cheeseburgers are one of my favorites. Yum!

I can't tell from the pics. Did you wear your orange shoes?

That is so awesome! I have always wanted to do one of those races!! It looks and sounds like you had a blast!

When I saw the pics on FB I thought, "Well lookie here..Isn't she a little firecracker".. Looks like such a good time for all.. And that burger (you left out the beer pic) looks yummy!!!!

"Surprisingly they were still speaking after it all". HA! This duo would NOT be...

sounds like "the amazing race", my very most favorite t.v. show!!!

what a great adventure....loved all the photo's and the burger...oh my!!

I think the nearly 6 hours was worth it..check out those fries! :)

I could never eat that after 14 km! I ran a 5 k once and felt sick to my stomach for at least an hour after!

Kinda reminds me of the amazing race! As for your dog...Nobody's perfect, Mom ;) I've got one with her own set of issues.

oh my lord, i do admire your adventurous spirit(s)! :)

Very very cool except the snake. Lots of fun I bet. B

Very very cool except the snake. Lots of fun I bet. B

I heard about this - very fun!

I guess I'd have to leave the farm to participate in one of those?

Looks like you two had fun and have a great memory of the day. :)

You lead the coolest life. I can't help but be inspired.

Ain't no way anybody ate that burger without a knife 'n fork. But congrats on the race!

That sounds like a lot of adventure - especially the boa constrictor! The true test of a monotony breaker's effectiveness is whether you can return to normalcy with a sigh of relief. Sounds like this one worked pretty well.

Wow! Congratulations you two. What an achievement.

This sounds just like you! Hey, I'll bet you had a ball.

I've never heard of anything like that! So cool! My favorite would be the food at the end too! :) Can't wait to hear about your next adventure.

Dawn am I losing my mind or what? I could have swore I commented on this before! Oh wait a second, was this also on fb? I'm soooo confused! lol Congrats once again on completing the run and it sounds like a fun race... you go girl! AND next time you're in the city let me know please, I'll see if I'm available to come cheer you on or just have a coffee with you if you're not here running. Have a great evening!

If only we were young again! How much fun is that!!!

I'm going to have to tell my husband about this... show him your blog.

You have a new follower. You guys are so awesome!

I love following your antics... you guys have so much fun and are so willing to share it with us.
thanks!!

What fun! That snake looks heavy!

sounds like that was quite an adventure! got to get out of the box once in awhile that's for sure.

that is quite a burger!
thank goodness for normalcy! :)

Dawn, that is so awesome!! You are always doing the most inspiring things. 2 Sole Racers is a pretty good looking team. You guys are so cute together.

What a fun time, I lied it all especially that vein clogging finish.I in the mood for one today, think i will take a raod trip to get one.

I am impressed with you both! Congratulations on your event and still speaking:)

OMG! That looks like such a fun day!! I wonder if they have something like that here? I'm going to have to look into it!! :D

oh that sure looks fun!

you have to be dedicated (and probably in love) to be in that type of race! sounds a bit like the cbs's Amazing Race...minus the million dollars. :oD

What fun and wow what a hamburger, I am starving so that looks wonderful.

Now the snake would just do me in completely!

Ok I was all into your shots until that snake shot. I just don't do snakes. Love the others.

Thanks for the kind words about Dave. I appreciate it.

Wow! Looks like an incredibly amazing day! I would love to give something like that a go! Great photo's. (:

Wow! You are amazing! I feel like such a slob now, lol! Really, really impressive, xoxo

Looks like quite a change from the normal! :) But those changes are needed now and then.

That looks like SO much fun! I love that you do sports but enjoy the pleasures of french fries afterward! :) Live it up!

Thanks for sharing the pictures! Yall look great!

Whoo hoo - no monotony there ! And the prize made it all worthwhile ! Did it beat the exhilaration of a 1/2 marathon though ?

If that burger was as big as it looks, I hope you did 28km and 11h20 the following day to burn off the excess calories...:-) I simply LOVE the nervous look of the guy with glasses in your snake picture!