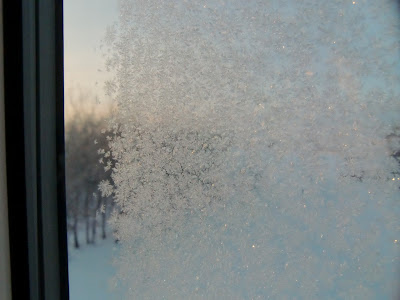 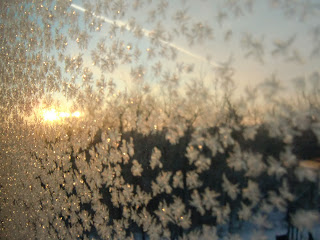 ~It's getting colder and colder here.
My window often looks like this when I wake up.
I don't mind the change in scenery....
as long as it doesn't last!~
It makes me think of my favorite "Artistic Photographer"....
Wilson A. Bentley.
(I did a post on this about a year ago, and thought I would "re-write" on him again.)
"I am a poor man except in the satisfaction  I get out of my work. In that respect I am one of the richest men in the world. I wouldn't change places with Henry Ford or John D. Rockefeller for all their millions! And I wouldn't change places with a king; nor for all his power and glory. I have my snowflakes!" (Wilson A. Bentley)
*****
****
Two years ago I bought my oldest son a book on Wilson A. Bentley...better known as "The Snowflake Man". Bentley spent his life (1865-1931) studying the science and magnificence of snow crystals. As a teen he taught himself to photograph snow flakes....and ended up with over 5,000 photographs of all different snow crystals...no 2 being alike!
I cannot imagine the time, dedication, let alone patience it would take to do something like that.
Yet, why would he not?
If possible, look at some of his work....it is absolutely incredible.
Each one IS different.
They're more than  just snow crystals. 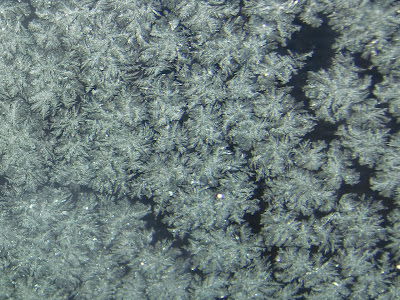 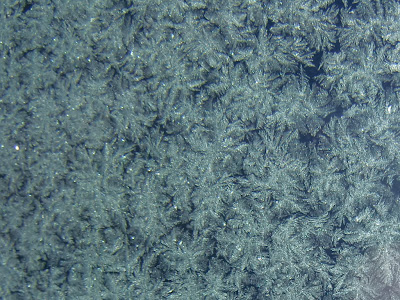 {My son took all these pictures for me.
I think Wilson A. Bentley is inspiring us!} 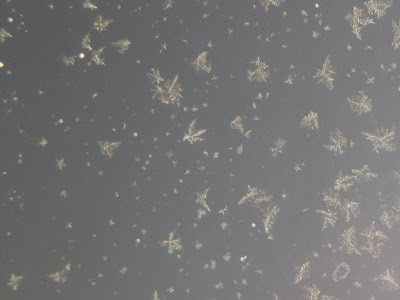 amazing!
We didn't get snow this year, would love to experience a white Christmas one year, but for now I'll just hope for beautiful sunshine

What beautiful pictures! We've had a dusting of snow on the mountain tops, but none in the valley yet. Will you have snow all winter now, Dawn? Or does it melt in between? I've become rather interested in Canada now that I have two Canadian blogging friends. :) And I rather envy your snowy wonderland!!!

Widge.....I can't imagine a place without snow. We have more months WITH snow than without!

Allison.....Yep- we will now be snowy until at least March.(unless a warm miracle happens:)
Some years we get a huge snow storm in April or even May. I try to be happy with the skiing I get to do in it. Can't imagine if I didn't make "use" of it all:))

That is sooo beautiful! Almost makes me wish for frost or snow in my part of the world (almost).

Looking at snowflakes on a winter's morn takes us into wonderland. I had no idea this book existed. Thanks.

Your son did an awesome job with these photographs, Dawn. They totally sparkle! I love snowflakes, too.

We're waiting for snow...supposed to get some, today. So far we've just had a light dusting.

Your new heading is so pretty!

Those are magnificent. The bottom pic looks like it's snowing.

Dawn..I am going to look to your blog to keep me in the "winter frame of mind"..Living in Florida we have one season, hot.It gets a bit mundane to say the least.

I grew up in a place with all 4 seasons, and do miss them.
Beautiful words and shots you posted here today.

I love your attitude about the snow and cold. I need to work on mine. The frosy window pictures are beautiful. Nature's paint brush. :)

We used to love to play with the frosty windows, only to the dispair of my mother who didn't always like the smudges. I get some nice shots on a kitchen window when the rising sun comes up through the frost.Winter is a cleansing season for nature.

these are really beautiful shots. frost really intrigues me as well. must let your son know his photo's are awesome!

so pretty...makes me excited for our first snow.

Love your son's photos! He's got his mother's eye for beauty! That last shot would make fantastic gift wrap! :)

Enjoy some crispiness for me! We still have 70 here today and humid. But the temps will drop to 40 sometime this week, so I guess I should enjoy it.

Oh Brrrr!
I can see snow in the mountians from here. That's about as close as I want to be.
FANTASTIC photos!!1

Hey there Dawn, I am somewhat jealous, I woke this morning to thundering and lightning....it is the middle of November.....So here in Chicago I think we will have a rough Jan.-Feb.

LOOOOOOVE those pictures!!! So beautiful! I'm gonna make the second one my screen saver! :) Tell your son amazing job!

Dawn, dear, your pics make me miss snow!! I only saw it while traveling abroad...we do not have snow in Brasil!
Be warm my friend!!! Love! Bela.

Cold and snowy here too.
Love the photos, here's a site my kids loved, you can make your own snowflakes.
http://snowflakes.barkleyus.com/index.html

Amazingly gorgeous pictures! We havent had snow yet but I am sure it`ll be here soon..blah

and flowers pick themselves said...

gorgeous. i love he subtle patterns within the frost.

These frosty pictures are beautiful! Isn't it amazing what patterns they make?! Lovely!

Your pictures are amazing, Dawn. Wish we had these beautiful ice stars on our windows in Wintertime too! January and February are the months with the biggest chance for snow. Must wait a little longer... I do not mind you sending one container though ;)
Love to YOU for a wonderful new week. xxxx

I love the pictures of the snowflakes on your windows, it is really cold where you life. I always wanted that mans book who studies snow flakes.You have such wonderful posts, so nice and peaceful and full of hope. I loved all of your quoted too. I love quotes because they are tiny glimpses into the windows of the heart.

Snowflakes are proof the God is the ultimate artist. Snowflakes and clouds.

Why the heck would anyone want to get rid of the penny? Does that mean that all prices would have to be rounded to the nearest nickel?

I am like you. I rather enjoy going it alone. I do it often and my mom and husband complain about how dangerous it is. Sometimes I feel like it would be more dangerous for me to be around people, though.

I'm just catching up. Haven't made my rounds in a while. :)

Beautiful pictures, your son is an artist. From your previous post -- who is that little new addition? Looks like Samson did as a puppy.

yikes....it's just a matter of time before my windows look like that, too. darn it !

One of my favorite children's books is "Snowflake Bentley." Such a fascinating, true-life story.

Wow, stunning shots and your son took these? He's an aspiring photographer I see, hats off to him for such magnificent work!

Brrrrrrrrr! Your son is quite the budding photographer! These shots are beautiful!

These are just beautiful. Frost paints such a beautiful picture doesn't it?

Dawn, these pictures are stunning, really! Hope you're doing well and in a happy place! hugs..

WOW! Gorgeous pictures! That is so amazing that they actually are snowflakes on your window! I'm excited because it got down to 50 degrees this morning... haha.
PS - love your new Christmas blog layout! So cute and festive! :)

Great shots - amazing that of the zillions of snowflakes, no 2 are alike ! We'll be back in snowflake territory for Christmas - I'm sure we'll get our share. I found some amazing ones last year on our pond - check this one.

Stunning photos. It never gets so cold where I live that we see ice crystals or snow.

i miss those snow crystals on the window...california winters just aren't the same as alberta winters!

Hello, Dawn. Thanks for stopping by my blog. You can find the picture book about Snowflake Bentley on Amazon by copy and pasting the link below. =)