The Prince and his Tad

Meet Tad....
my son raised him from a little slimy black dot of an egg. 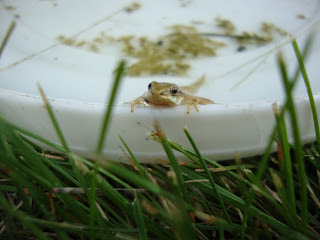 He rescued the mass of black from a dugout down the hill, kept him in a 5 gallon pail, and has watched him grow over the past month.
"Lovingly" killing mosquitoes, he's fed it-
Has supplied it with more dirty dugout water-
Watched it grow from the dot of an egg,
to a black swimming tadpole,
to a tad with small sprouts for legs,
and now this Thing with a long tail which now hops quickly through the grass when let out of his bucket. 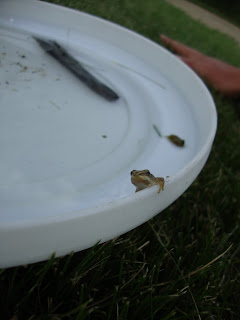 Me.....being the skeptical mother i am....got dragged out every other day for a visual update on "my Tad".
Truthfully....I don't enjoy science.
I don't like experiments...especially messy or creature related.
Reading about metamorphosis or any life cycle is enough out of a textbook,
and then I'm done.
But day after day, as those globs began to change.....
Well.
I'm kicking myself now for not documenting the entire thing as a good mother should.
The least I could have done was to take pictures every so often...JUST IN CASE
it really did turn into something.
But I didn't.
Regardless...it DiD change.
And now he almost has his fully grown Tad. 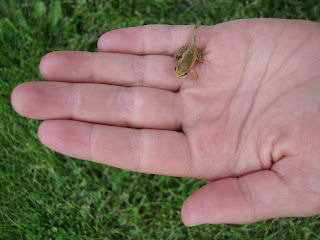 Next time, when the miracle of creation comes knocking on my door to "come look"...
I won't go quite as grudgingly.
Who knows what a blob may turn into.....
Posted by Dawn at 9:30 PM

Don't you just hate that when a moment has passed and you realize (all too late) that you failed to document it through image? Happens to me all the time! :)
Pretty cute tiny little toad/frog!

"Next time, when the miracle of creation comes knocking on my door to "come look"..."

Very nice post, and I know you are proud to have witnessed this miracle of life.