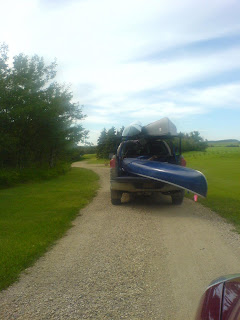 This weekend 6 people decided to paddle down a stretch of the Red Deer River.
They loaded 2 canoes and one kayak into the back of a truck, everyone armed with a paddle (or 2), a lunch stuffed into a small cooler, and drinking water. (Of course everyone made sure to have extra....remember LAST year's (mis)Adventure ?) 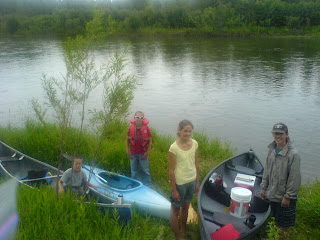 Thankfully this excursion wasn't quite so adventurous as the last...
but it seemed a pretty fun day for the majority. 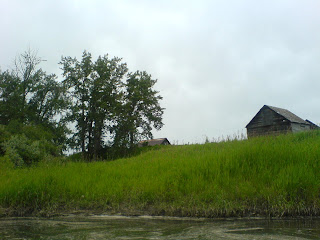 There was a lot to see, not only along the rivers edge but in the water as well.
Of course fish were spotted, (more so when the rain started),
along with Pelicans, Blue Herons, Eagles,  Hawks, and quite a few deer. 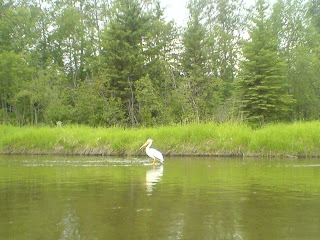 Probably the most fun these 6 had, besides maneuvering through a few
small rapids along the way,
were collecting items from along the banks.
As 2 of the people knew...who had already experienced
river storms before (see again past Adventure)....
great winds often sweep down along the river between the steep banks.
This wind can cause items to be pulled swiftly out of hands or out
from under a person who once was pleasantly drifting down the river
minding their own business.
Never before had these 6 seen such a collection of flotation devices.
Air mattresses and dingys...not to mention all the rubber tire tubes!
The beginning of the expedition began somewhat like this: 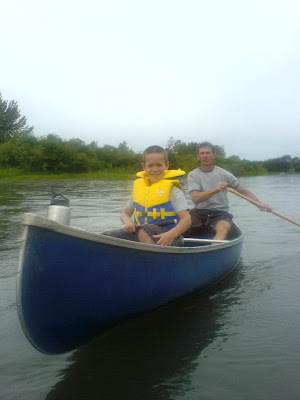 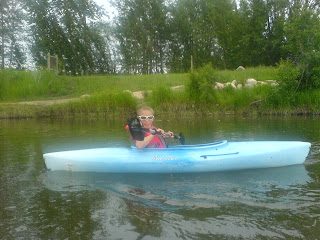 And as paddling went on, it looked like this: 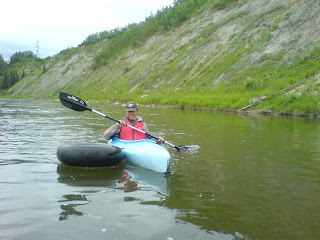 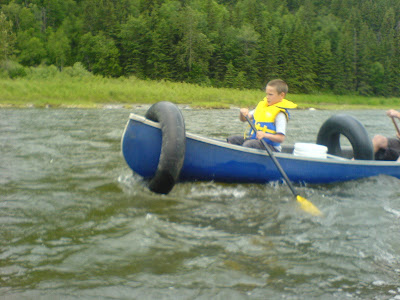 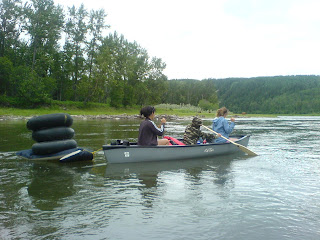 Considering all these 6 had planned on doing was paddling -and not intending to find any loot,
the day turned out quite okay.
They now have many flotation devices for more water adventure...and
of course, the entire family felt safer as the day worn on.
There was a lot to grab if anyone should capsize.
For the majority of the 40km river trek the weather was perfect,
and it wasn't until the last half hour that anyone got wet.
By the time they pulled all boats (and the river clean-up items) onto shore,
everyone looked as if they had been dunked.
No one minded though.
It was a perfect Paddle Day, and the next trip is going to be longer.
They're planning a overnight (or 2) adventure for later on this summer. 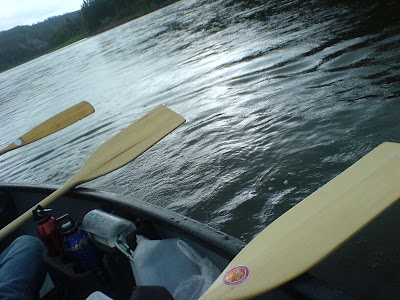 ergh...I wrote you this long comment and then accidentally deleted it. Wishing I could do some paddling for a weekend. So pretty. :)
I need to send your mom a little note...she is so nice and sent me an email a while ago and I keep forgetting to send her a note back...bad niece me. Hope your week is going great! xoxo

What a great post! Loved the narrative with the photos. It made it all come alive!
great job...

What fun!!! I love the little collection that was found...who knew you could pick up so many of those intertubes.
Thank you so so much for entering my giveaway..keeping my fingers crossed for you my dear. xoxoxo