the Old and New 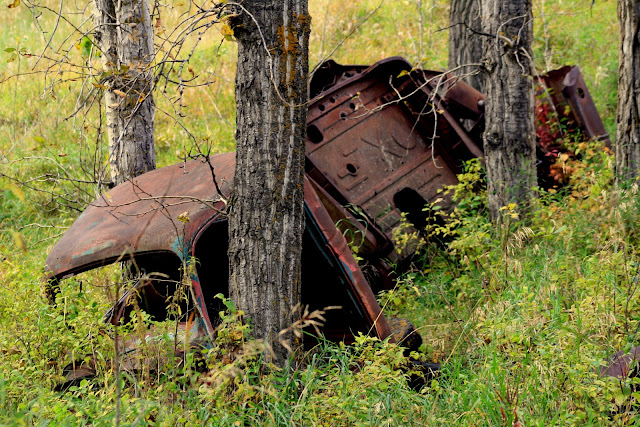 They say some things aren't worth keeping.
Once it gets old and worn...get rid of it.
The old seems useless when the "better" comes along.

Funny thing is, old things don't ever really go away.
They may get hidden....but they're still there. 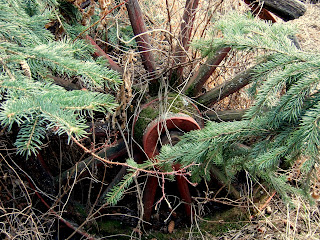 Some say "out with the old~in with the new"...
but more often than not, "the old" was better than the new. 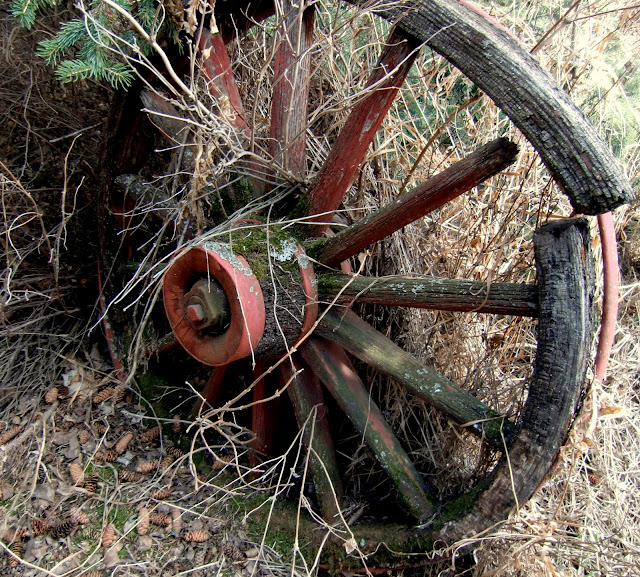 ~The grass usually isn't greener on the other side,
but humanly we usually think it's so.~
Don't we? 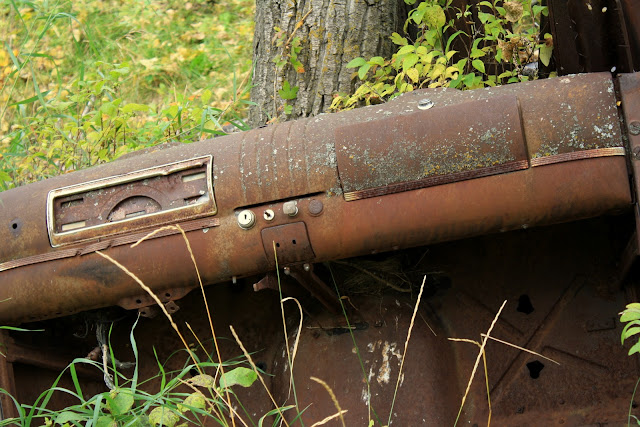 I don't think I would have wanted to be in that truck when it got lodged between those trees...Whenevr I see old abandoned vehicles like that, I wonder just how they came to be there. I wonder what story this old truck has to tell.

From Beyond My Kitchen Window said...

Sometimes if you wait long enough old is new again.

I hope I look that good when I get older.

Old stuff is sometimes good, I saw today LP records for sale (new) for $36! The same CD was $12. I better dig all my old LP, EP and singles out and give them a spin.

Lovely pics,I wonder what story the old truck and the old wagon wheel has to tell...I agree,it would have been nice if we where all still going around in wagons...life would have been so much simpler then and nobody would expect you to travel to sports games with your children at three in the morning!!

Wonderful photos. Most of those who think "out with the old" eventually come around to appreciate what they've lost. Hopefully.

All very nice, I wondered if those trees were growing around the truck.

Awesome photos Dawn! I'd best tread carefully, I'm not old, but my age continues to increase... yikes! Mind you, if something better comes along, he might as well go for it... I'm not too worried, I'm about as good as it gets! LOL Have a fantastic weekend!

The old things just need to be "discovered" !

Hi there
You have a very interesting blog!
Love the pictures of the old wheel!
Greetings from Switzerland
Yvonne & Raphael

We have an old abandoned wagon up in our woods. I've always wondered about the story behind it.

Love the pics of the abandoned stuff.

"the old" always makes for wonderful photo subjects. maybe we should consider this with people too. :o)

Now, that truck has been there for quite a while. I don't see this kind of thing, but maybe I am just blind to it.

You're not lyin' when you say, the old was better than the new... that seems to be the case more & more all the time... people don't take pride in what they make now & it's getting bad! =0

How can people just push an entire truck off into the woods? Unbelievable! We're all held accountable for our actions, though...

They just don't make things like they used to.
I got my mail from you yesterday!! It made my day. Thanks so much for the little notebook and the pictures. The poppy picture was exactly what I needed. A breath of fresh summer air!
Hugs- Jo

Love your photos today, have you tried to take photos of these objects at different times of the day like in the evening or early morning. Sometime different lighting make a big difference and can make great mood photos.

Great photos, I'm surprised someone hasn't taken them to decorate their yards.

It's always interesting to find old abandoned vehicles. I'm led to wonder where they've been and why they were left in that particular place.
The old wheel is quaint and would make a nice decoration for someone's garden.

Oh Dawn. Such a gift you have with that eye of your. :)