Well I was lucky enough to make another trip to the mountains last weekend, and re-hike the trail where I had met them last Fall.
I wanted to see what they had seen over the years- the differences between the seasons.
And....in a sense....hike the trail in honor of the both of them,  who said they had hiked their last up to this amazing place. 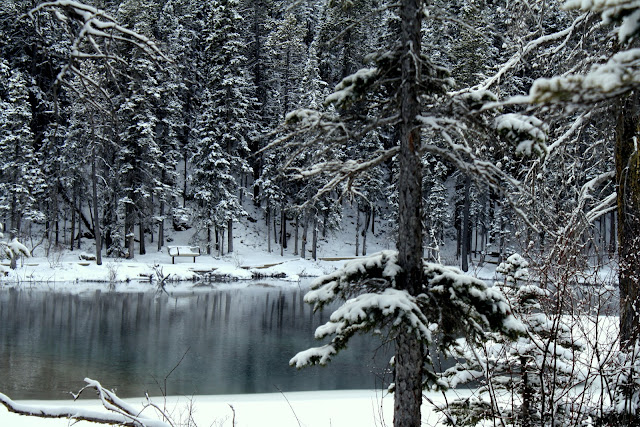 (the bench where they sat and we visited last fall)
~~~~~~~~~~~~~~~
Snow had fallen during the night, and when I got to the trail head
I was thrilled to find no one yet had arrived...
{which meant I got to make the first tracks in the new snow.}
I felt like a kid.
First one to make new tracks is something to smile over.
(for me at least:) 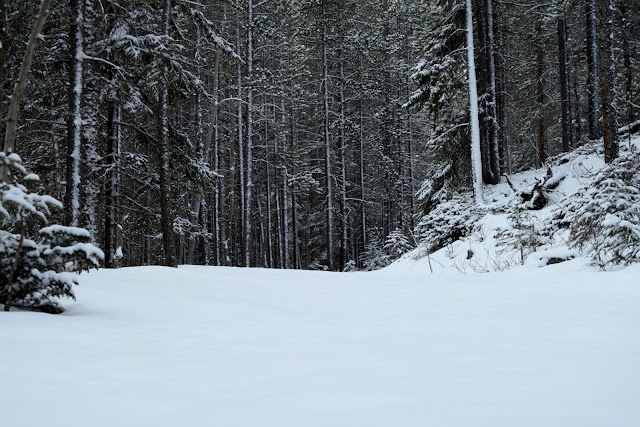 My favorite "difficult trail" was closed for the winter, so Easy it was.
But just as beautiful. 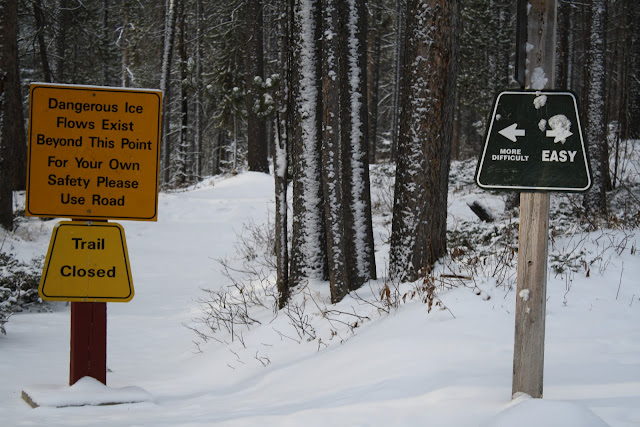 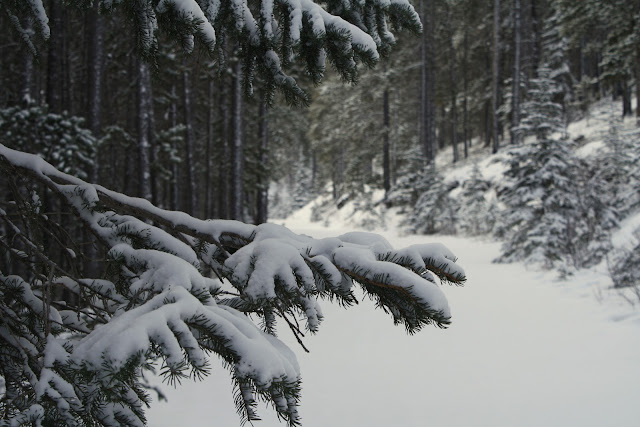 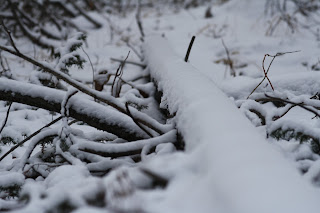 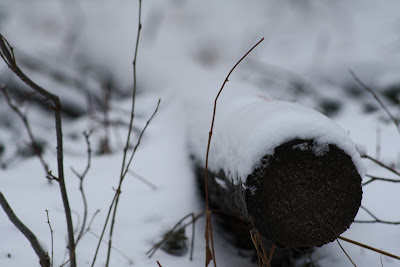 The view as I climbed were just as breathtaking as in the summer...maybe more so after a snowfall. 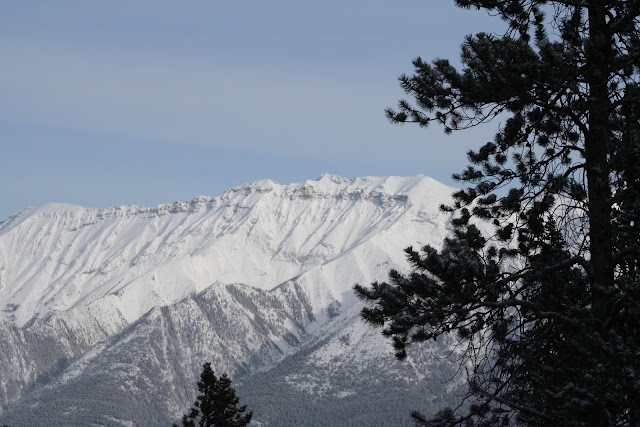 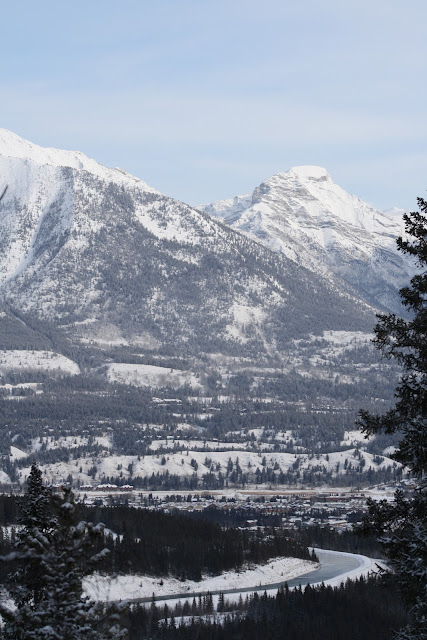 And then The Lakes came into view.
It was unearthly quiet and still.
And beautiful.
I truly felt as though I had stumbled into some sort of winter dream. 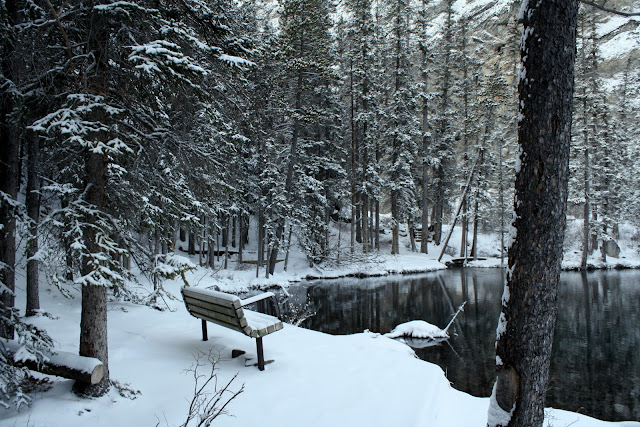 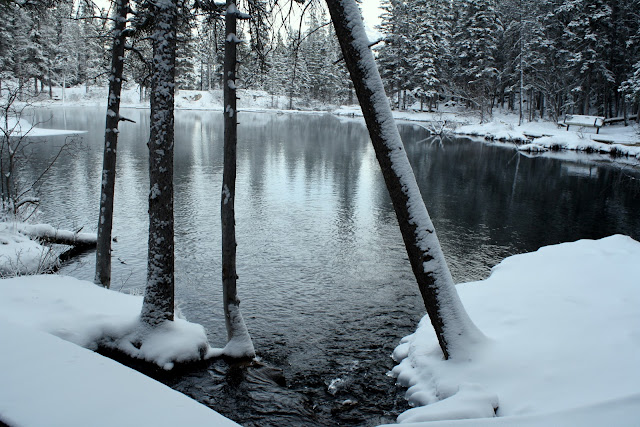 No wonder they loved this place in the winter.
I can't even describe it, nor can these pictures. 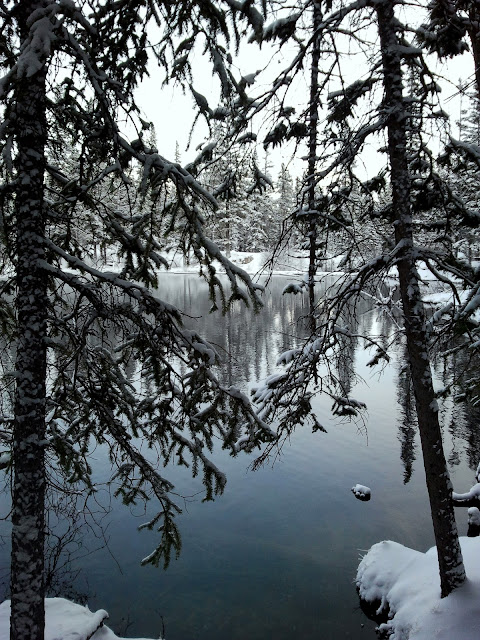 It seems as though the couple I met months ago had a secret in this winter trail~
and I'm incredibly thrilled they shared it with me.

just beautiful. and yes, i remember that couple. God bless them.

that last photo - the pines look almost like they're reaching over to touch one another. rather appropriate, i think.

Beautiful pics Dawn! When I saw the original post I almost suggested you talk your hubby in to hiking the trail with you so you two could take the old couples place. Since you re-posted about it, I definitely think should do it. How cool would that be?

A wonderful post, Dawn! That warning sign made sense and yet, the snowfall left everything looking so inviting! :)

Wouldn't mind hiking with you there, Darling Dawn. :)

What a hike! Just gorgeous :-)

Incredible beauty and your description takes me back to memories of trekking through new fallen snow, alone in the quiet of woods, leaving but one set of footprints behind.

Thanks for sharing the beauty of this peaceful place the couple shared with u, Dawn.
Hugs, Pam :)

Oh Dawn I could hardly pull myself away from the beauty of this post. Your photos are awesome and I just wanted to jump right into the computer and follow you. I can see why the couple were together and happy so long.
You live in heaven. B

Truly awesome. I may not hike but how I love that you share your efforts with us.

Beautiful! Absolutely love the photo with the bench

Dawn, I am so glad you shared this with us. You made me smile this morning. I would have loved to see those sights in person.

That is absolutely gorgeous!

Wonderful winter photos, and a great place to be in. I can imagine your feelings when you got there first..

What a charmer, I really enjoyed these even more knowing your story.

I well remember your post about the couple, Dawn. Your story of your experience with them touched my heart. It reminded me of how Andy and I hike to our wedding tree every anniversary; and it made me wonder how long we'll be able to continue our journey up there. While we rarely get snow here on the coast, I'm thinking we should visit more often throughout the seasons. Thank you for sharing such touching sentiments and beautiful pictures.

In the summer, when you are the first to hit the trail, you get to clean the spider webs out. In the winter, you're treated to a beautiful unspoiled blanket of snow...

Were you hiking or on skis? I got to ski again on Saturday (after having spent part of the week in Orlando) but it started raining last night and the snow is about going (and the temperatures are to drop tonight so we'll have an icy mess)

I can see why you went back, it is just breath taking beautiful in the snow.

The early bird gets the solitude. Well worth the effort to brave the early part of the day and the lower temps. Very, very wonderful scenery.

It's not quite fare.

Seems you've done all the work and we get to enjoy the fantastic views!!!

Have a blessed week sweetie!!! :o)

Hi Dawn, awesome winter photos. this place is very beautiful in the winter. Thank you for sharing this beautiful area with us.

Absolutely stunning, it looks like someplace out of Narnia

Thank you, Dawn, for taking us on your beautiful journey! ;o)

These are amazing. Wish I was with you. I agree about the first footsteps in fresh snow. Isn't it wonderful!

A wonderful post today, and a nice occasion for you and for us to recall your earlier poignant post about the older couple and their walking tradition as it fades to black.

there is nothing like the winter scene in the Rocky Mountains! Breathtaking photo's Dawn! well done!

ooohhhh dawn, i remember that entry it was so beautifully writen and meant so much to me as i read it that day!!

the last one is my favorite but they are all awesome captures. the early bird gets the beautiful pictures!!

p.s....next time, photograph your footprints in the snow, i have always loved that!!

I remember that post well, Dawn. How nice that you have an opportunity to recall your chance meeting when you run this trail. It's gorgeous. :)

What beauty!!! Snow is incredible.

I love how fresh everything looks! Beautiful!

I want to be there... now! Your photos do it justice, Dawn. Great job.

Yes I remember them, and I almost wished they had followed your Trail breaking tracks and visited Again!

Absolutely beautiful!! A brisk hike over a snowy trail is one of my favorite things. :)