.....it seems they're going out of style in a way, or at least I don't send out as many as I used to. We seem to rely on e-mail or some sort of electonic message "system" to send our Christmas Greetings nowdays. Which- don't get me wrong- is fine, dandy, wonderful. But who doesn't like getting some sort of Christmas Greeting in the mail?

I have a book that I bring out each December to sit on my coffee table. It's part of the "Christmas Card Songbook" put out by Hallmark. At the beginning of the book is an interesting "chapter" on the Christmas Card and it's origination.

"More than a century ago, in 1843, London businessman Henry Cole originated the Christmas Card custom. His idea of Christmas in an envelope came only 3 years after the English postal reform that made it possible to send mail to friends near and far for a penny." (The Story of the Christmas Card~Hallmark)

In this book are pictures of past Hallmark Cards, from as far back as the late 1800's.

(I wanted to post some here but because of copyright laws thought it best not to! But look for the book- "The Hallmark Christmas Songbook"- probably at a Hallmark Store or even through Amazon. Or you can come look at mine:))

Here are some cards I've received in my end-of-the-driveway mail-box this December.... 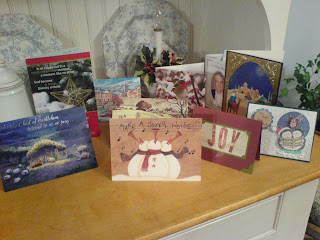 One of my favorites, made and sent by my Aunt.... 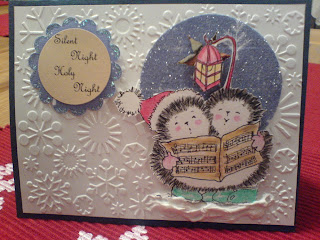 Merry Christmas in an envelope!