Once upon a time...
there was a horse.
A 3 year old paint who was a tad bit spoiled.
There was also a girl....who loved all horses, and decided that this paint was what she wanted to buy with money she had been saving.
Her very first horse of her own. 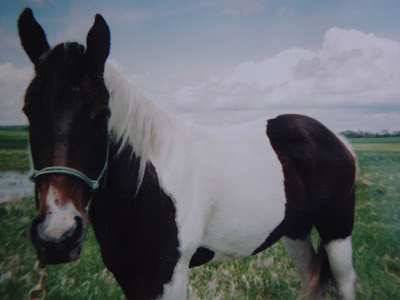 Because this 2 year old horse was a tad bit spoiled, the girls' mother thought the best thing to do was to send the horse to school before the girl rode it.
It was loaded and taken out east of town, where she went to school every day for weeks.
The girl (and her mother) waited for the horse's return....dreaming of rides through pastures to watch the sunrise, or down country roads after schoolwork was completed for the day.
After weeks of waiting- the girl along with her mother- drove out to pick up the trained horse.
She road her horse around the trainers corral....the paint listening, responding, and riding like a perfectly schooled student.
The trainer explained that only a lot of riding and plenty experience would make the horse what the girl wanted now, so the horse was loaded and taken home.
(Although not before a hefty cheque was written by the mother for all the trainers' effort.)
Arriving home, the girl of course wanted to try out her "new horse" in her own corral.
She saddled that paint, checked and double checked the gear, then mounted.
All went well for several minutes, until the horse decided everything was just too new.
(You can't blame the horse...for it HAD been through a lot over the weeks, just endured an hour drive in a smelly horse trailer,  and was being ridden in a strange corral.....)
She began crow-hopping with the girl hanging on to her back.
When the paint had finally calmed down enough so the girl could dismount and calm her own nerves....the mother decided the horse needed to be shown that the kind of behavior just displayed would not be tolerated. She needed to be ridden again.
The girl called her father.
The father was not a horse guy.
He had ridden before...but riding horses was just not up his alley.
But oh what parents will do for their children.....
Within a  minute of walking the horse around to calm it down and show it there was nothing to be worried about...the girls' 6'4 /200lb father was flung through the air in a blink.
He lay on the ground gasping for air, as the paint took off around the corral kicking her heels in freedom.
The dad broke a couple of ribs that day.
The paint was put in the pasture until further notice.
And the girl...realizing her mother would not allow her the freedom of riding her newly "trained" paint until further notice, resorted to riding her 15 year old gelding once again.
~~~~~~~
Fast forward several months.
The mother and daughter both agreed it would be foolish to put more money out in training a horse which was now growing taller and faster than expected.
The horse was put up for sale.
Week after week went by, and the horse just took up space in the fields.....pretty to look at, but not fulfilling the dream for which the girl had bought her.
Oh...the girl would take the horse out of pasture, lead her to the corral, lunge her, spend time with her doing groundwork, but never riding.
Or so the mother believed.
Whispers were heard one day.
An apologetic grin was given.
Questions were asked....
had the girl actually been on and riding that paint?!? 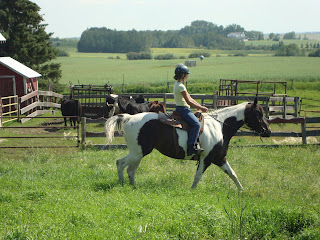 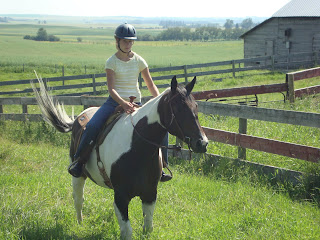 Supposedly a surprise was being planned.
A demonstration of sorts was being prepared....
and the mother, much to her "horror", dismay, disbelief, came across this planned spectacle just the other day.
{What one can do when fear is not a factor.}
Is it just because at that age you aren't aware of the dangers?
Is it determination to conquer something that seems too big- a type of challenge?
OR...is it a love for something....
and the one who loves,
realizes that risks and sacrifices are made in order to build that trust and love....?
The mother has reluctantly agreed to the "training" occurring in the corral.
Risks are a part of life.
Life would not be quite as fulfilling if none were ever taken...
and who knows just where love would be.
~~~~~~~~~~~~~~~~~~~~~~~~~~~~~~~~~~~ 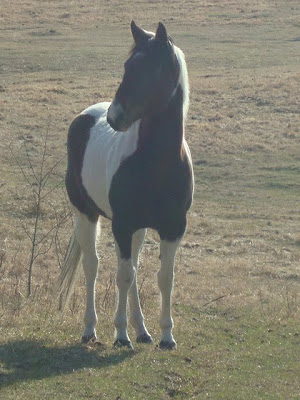 Dawn, my dear, where are you in Canada? I grew up on the Prairies...is that my parents' farm in the background? hehe

It just may be:)
Central Alberta is home. Do you miss the prairies?