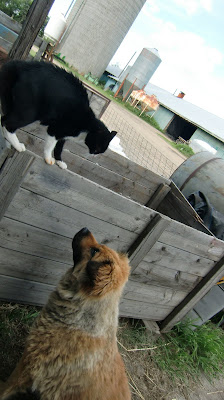 My son came down the other morning with a black eye. Well....bruised....but still black nonetheless.
When I asked him what happened...he stated his younger brother had hit him.
The younger brother jumped in and tried to save his hyney by saying that, ``Ì warned him! I told him not to bug me again or he`d get it!`....
(I never said my kids were perfect...I lead a very average life with average kids.)

They weren`t mad at each other, in fact my one son seemed proud of his bruise.
But what got me was that the black eye was given...and no responsibility was taken for it.
It was given....and it was the ``not my fault cause he deserved it`` ..... kind of attitude that got me.

Day before that.....
I had my van in a local mechanic shop to get fixed.
While it was there...one of the mechanics lost my remote starter.
The company replaced it...but not for free. $60 later I had a new one.
When we asked why we were made to pay for the lost starter which they had lost....they claimed it wasn`t really their fault.
``Besides``....the manager said, ``How do I know you aren`t lying....I have no proof that we actually lost it``....
Hmmmm......that dosen`t make sense to me.
Maybe I`m just slow...... but it seems to me someone should have once again, stepped up and taken responsibility for their actions.

Fast forward 2 days after THAT incident.
To a mother who had an absolute meltdown in front of her kids.
Blamed the rotten day on how they were acting and what they weren`t doing and what they shouldn't BE doing.
Really...how do you expect a mother to act when her kids aren`t performing how she thinks they should.....

So....yep, Boy number 4 should have apologized to Boy number 3 for the punch, regardless. He still hit him.

Yep....the mechanic shop should have reimbursed me for the lost starter and they never should have charged me for it. They could have least given me a refund for what I had to Pay THEM.....but, how do you fight a generational business. Guess we just don`t go back.

And that mom.....she needs to admit that...
ONE: she WAS having a lousy day.
But TWO: she alone was in control and responsible for how she acted in each situation.
The meltdown needs to be apologized for....regardless of what led up to that meltdown.

Admit it...we can`t always be perfect.
Taking responsibility for actions....
guess that`s what I`m off to do now.

Apology for meltdown being delivered as soon as I finish typing up this post.....
:)
Posted by Dawn at 3:06 PM

I can't believe that garage did that to you. I work in a body shop and, let me tell ya, we make plenty of mistakes. But we always take care of them as our responsibility.

I must say, sometimes it is really hard to control yourself when it seems that your actions are justified. But also, note that your other son wasn't mad about the black eye. He knew he sort of deserved it. Sometimes it takes a little forcefulness to not get run over.

Thanks for stopping by to check on me. ;)

great post! it's true, sometimes admitting we're wrong and taking responsibility for our actions is the hardest thing to do. but when we do, we feel better than lying to ourselves (or others!) i'm sorry that mechanic has such terrible attitude toward customer service. but you're right--just don't go back! ;) and raising kids is always such an adventure!

Soemtimes admiting we are wrong or taking responsibility for our behaviour/actions is the hardest part of what we were actually doing!!

But geez, how is the mechanical shop - i hope you're not going back there again.

And yes, i hear you re your kids - boy no 4 shld def apologise and also realise that it's not cool to resort to physical behaviour when boy 3 doesn't listen.

and meltdowns happen - quite frequently in this house. but, as long as we realise why it's happening and can speak to those about it - and have them understand our weird behaviour (but not condone it) is all part of being a mom? Happy Day xx

You cannot know how much I LOVE or better yet, needed, this post, Dawn. Thank you for the recognition, thank you for your look on things, thank you for blowing a fresh and friendly wind through my mind!
Hope your day is a good one so far, enjoy the rest of it xxxxxx

A really good post!
You are so right! We all have our moments and that's okay, we just need to take responsiblity for what we say and do.

The guy who told you that at the garage needs to have his head slapped...oops! see there I go....meltdown!

It is not easy being a mom and the responsible person. I guess that mechanical shop will never see you again;-D

so true - and we've all been there. thanks for sharing.