Lacombe RV Charity Triathlon
September 6, 2010
~the "calm before the storm of swimmers"~ 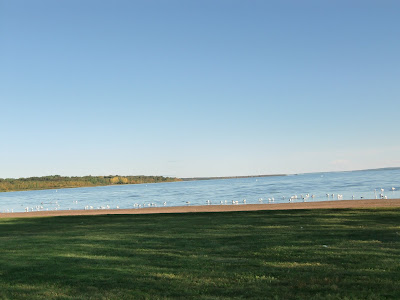 ~The day started with  freezing temps...I scraped ice off my vehicle when I left at 6:30am. But as the day progressed...the sun melted it all away and it actually felt warm.~
The water didn't  though.... 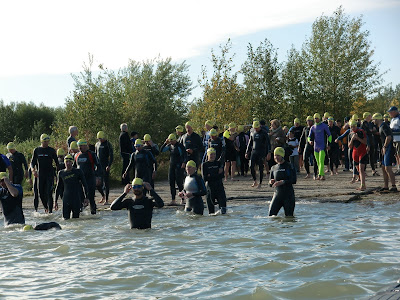 {~I feel like this should be a "Where's Waldo" picture:)~}
Here in the lake...probably when half of the distance was behind me- is where I battled my mind. The water was not only cold, but choppy, and anytime I put my head in to do front crawl I became disorientated and felt I was doing circles. I ended up forgetting my "practiced swim stroke" and did whatever I could to get to the end of the 750m. 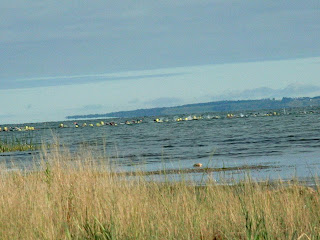 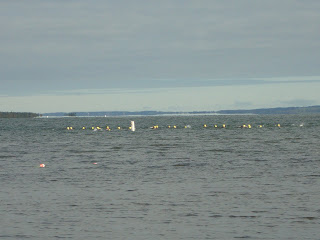 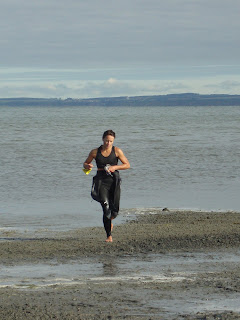 ~Running out of the lake, I felt that was it. Sure I was glad the water was behind me, but I couldn't believe I had to hop on my bike after that mental war.
But I did.~
{(Time-19:50...my lane swim usually is just under 15 minutes for this same distance:( I want to blame it on the lake...
but know I need to train in the lake next year!}
{It felt good to catch my breath in the transition:)} 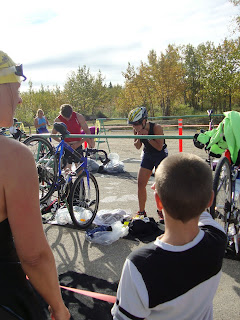 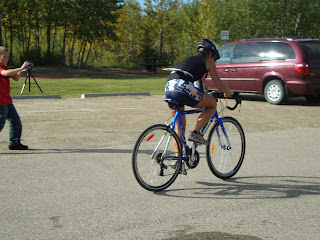 I thought the run would be the easiest for me, but the bike was awesome.
Yep- there was a head wind almost the entire 20km.....but I felt I could breathe, and think of something other than staying afloat:)
It's funny the things that went through my head during that bike distance.
And I don't think I have ever talked to myself quite so much- out loud.
(Time-46:17) 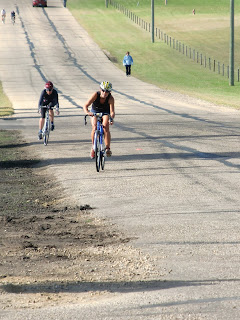 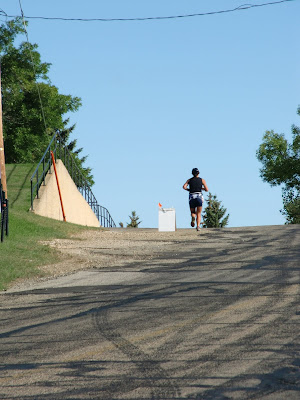 After parking my bike, I realized I now had to run up this hill....I must have read the course route wrong:) Maybe it was better it happened "spontaneously". I felt like the entire crowd was watching....so I gave it up this hill...only to slow down to a fast walk to catch my breath when I knew no one could see me over the top:)
I DID pick up the pace after that...and the trail was beautiful. I think what made dodging trees and roots a bit easier was the Mountain Trail race the weekend before. I pretended I was in the mountains on a short 5k sprint. It was beautiful...I'd like to go back and enjoy the scenery when I'm not running for a time:)
(Time-31:49) 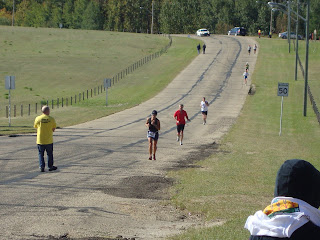 THIS does not look like me...my running form looks all out of line. But my legs felt like lead, and climbing the hill to the finish almost got me. 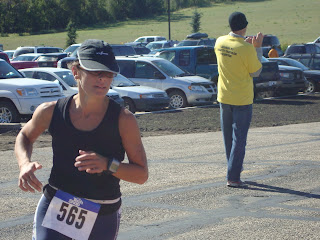 And I think here..I was just in disbelief I had done the thing:) 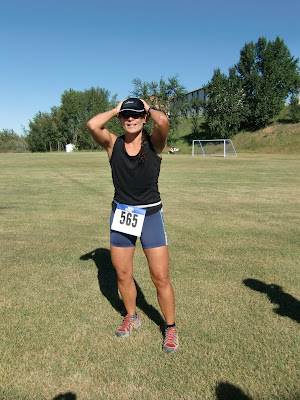 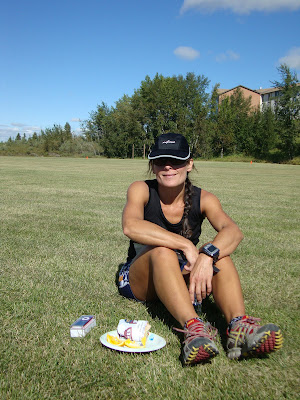 It WAS an amazing day. Friends came out of no where to be there for me, and Thank You for that! I felt truly blessed to have people there that believed I could do this triathlon- even when I myself never dreamed I could do something like this! It's amazing what people having faith in you can do:)

This triathlon was on my "bucket list" so to speak, but it also made me want to put something else back on the list...maybe an Olympic Distance next July in Calgary.....

That is seriously impressive, well done!

Wow yo0u are such an inspiration...but hell girl I'm glad I'm old as I could never attempt this...far too hectic for this old one!!!

Hello, found you via Marcy (and my sister who is i'm so not a blogger). Love your blog. You sound a bit like me - which must be good yes?

Gorgeous photos you take and well done on completing a triathlon. You go!

But just remembered that my blog is private! so if you want to read me just mail me shayneschatabsamail.co.za

Thanks for the link, it's good to hear I wasn't the only one that struggled with that swim! It is so cool to race in front of friends and family cheering you on.

Would I be able to borrow the Where's Waldo picture and include it in my post? I'm front and centre in it, and I don't have any of my own pictures of the race. If you're not okay with that, no problem.

I'm so not a blogger...thanks;) I think it was more fun than impressive. I did it to say I did one..now I want to do more:)

Ian....you are welcome to the photo. My son took it with all the other photographers standing on the pier! No problem at all:)

Dawn I am so impressed with your time! Don't beat yourelf up on the swim it is always slower in an open water race than in practice... just too much traffic to deal with and looking up for bouys more often. My fastest 750 in a race was 17, my first was 21 so I think you did awesome!

It sounds like you got the "tri high" at the finish line. It is such and awesome feeling when you cross that line and realize you did something you never thought possible.

Way to go on your achievement! I am very proud of you. I don't know much about tris or anything, just running for now, but TO transition yourself to do 3 different things takes some kind of strength. Very well done.

I am so totally stoked for you. Girl, you are so strong and amazing! You look like a super star in that pic coming out of the water. You kicked its hiney! Way to go.

Dawn, I am SO proud of you girl! Way to go. You are a true inspiration for other women out there who have always wanted to do a tri, but never thought possible. I would LOVE for you to share your story on the Bella Blog. Way to go!