With one look at the sky and a sudden strong wind that seemed to come out of no where- the 4 paddlers turned the canoes sharply to a rocky edge of the river and began pulling the canoes in. Within literal seconds the wind turned into a force much stronger than hats on heads and articles of gear in the canoes, and whatever wasn't held firmly down got whisked away into the air or water.
One of the sisters took charge and began to shout orders to the other stunned sister...."Put your lifejacket on!!!" "Where are your shoes?!!!".....The oldest sister looked lost and could only focus on the spiral of a dust "storm" heading towards them. While the 3 others pulled the canoes as quickly as they could manage into a slope of trees....she was only thinking of where her hat was...and where to go from the wind that was growing steadily worse and shooting some bits of rocks and sand at her legs.
Climbing up the slope and into a clump of trees and prickly thorn bushes- her only thought then was that you weren't supposed to hide under a tree when thunder and lightning were booming and flashing above your head. But with the roaring wind pushing everything past as quickly as it was- there didn't seem to be an option. The last thing she saw before pulling her hood over her head and ducking down to grab the base of a tree- was a tent...that was perched on the side of a bank just ahead of them. For some strange reason she was wondering if there were people in it and how they were managing to hold the thing down.

Rain came down in torrents, and the path where she was standing began to turn in to a runway for a very large current of water. Then came hail...pelting at legs. The thunder was incredibly loud and close...and unfortunately so was the lightning. At one point a bolt struck across the river on the bank from the 4...it lit everything around them in an eery glow.

When the worst of the storms' fury had passed, the 4 slowly came out from the trees. The wind had moved alot of things...including the tent that had been on the bank. It wasn't ever seen by any of them again. (They are assuming that there were no people in it holding it down?....)

In order to make this "Once Upon a Time Story" seem authentic....I'll have to throw some pictures into the tale: 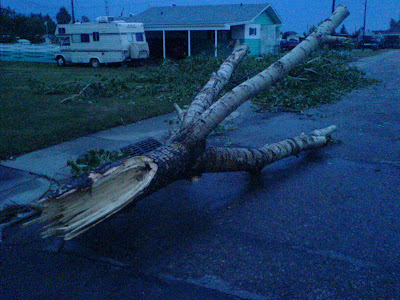 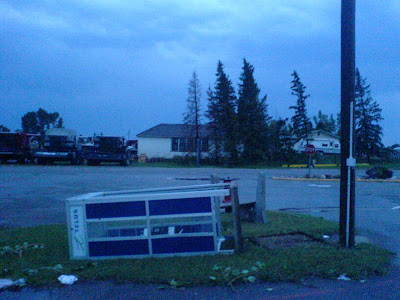 And the next day, when looking around..... 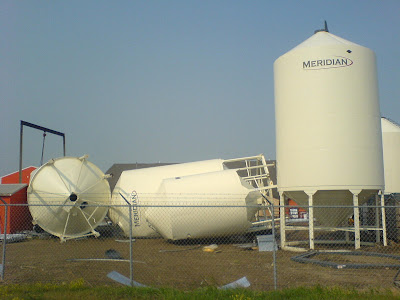 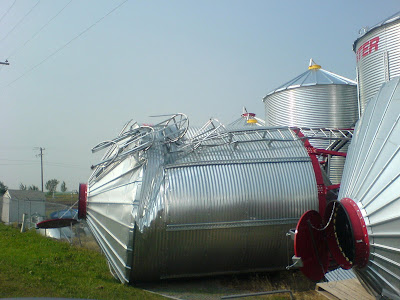 Pictures that aren't included would be: the tandem truck blown over the edge of a hill, half of a roof ripped off an entire apartment building, stacked lumber which then looked like a spaghetti plate, hundreds of trees either uprooted or broken off and shredded, metal sheds blown apart and wrapped around other objects, signs and windows broken apart....

In the daylight- a picture of the "Perfect Canoe Safety Placement": 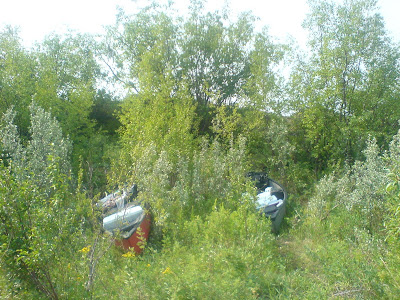 The 2 sisters - along with their husbands- have decided that they will complete the last 55km of their journey in another chapter of this summer. They've had enough adventure for this long weekend.

What about your hat??

Someone grabbed it from the water for me before it washed away....we found 2 other hats down aways after the storm. One was hung on a tree. All good:)